In terms of labour participation, the CMIE pegged the figure for the last week of March at 39 per cent and 36 per cent for the first week of April.

NEW DELHI: Mumbai-based think tank, the Centre for Monitoring Indian Economy (CMIE), on Tuesday said the unemployment rate in the country in March rose to 8.7 per cent — the highest for the month in 43 years.

The labour participation rate has also dropped below 42 per cent for the first time ever, it said.

“It (LPR) seems to have nosedived in March after having struggled to remain stable over the past two years. Then, there is a precipitous fall,” CEO of CMIE Mahesh Vyas said.

The unemployment rate is calculated by surveying the people who are out of jobs and actively searching for one.

In terms of labour participation, the CMIE pegged the figure for the last week of March at 39 per cent and 36 per cent for the first week of April.

Vyas said that the usual sample size for the weekly figures was around 25000 but due to the lockdown enforced owing to the coronavirus pandemic, the sample size for March was 2300 and for April was 9500.

“We found the unemployment rate in March last week around 23 per cent but did not release the figures as the sample size was too small but when we found the same figure in April, we were pretty confident and released the figures,” he said and added that the survey for the two weeks was done telephonically as against the usual practice of door-to-door.

The sample for both weeks includes daily wage workers, contract workers, salaried employees, construction workers, MGNREGA workers and agricultural labourers. However, Vyas said, that the section of migrant workers was underrepresented in the sample. 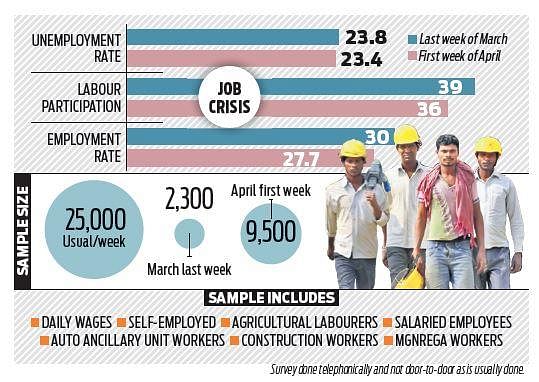