It’s not only jail inmates or cops who are stitching three-layer cotton masks for the masses to shield against Coronavirus.

Politicians turn tailors, cooks
It’s not only jail inmates or cops who are stitching three-layer cotton masks for the masses to shield against Coronavirus. Even politicians have donned the role of tailors for the public. In Rewa district, local BJP MP Janardan Mishra has been not only following lockdown by staying indoors, but the 63-year-old is also stitching cotton masks at home and distributing them among the poor people. BJP MLA Pradeep Patel too has been stitching masks and cooking food for the poor. 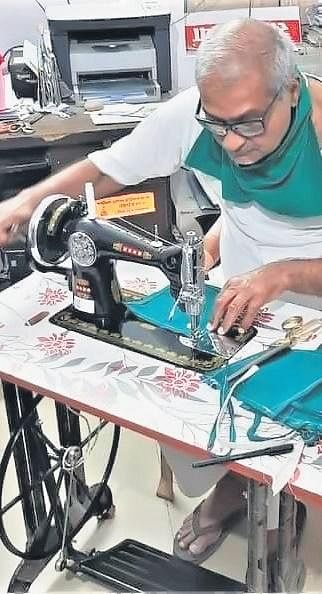 Vultures, wild boars venture out in open
One good side of the statewide lock-down is that wild animals are now coming out in the open due to non-human interventions. In Hoshangabad district, a wake of vultures was seen for the first time feeding on a cow carcass. According to DFO Hoshangabad Ajay Pandey, the vultures were spotted on the main national highway connecting Hoshangabad town with Itarsi. “Never in last one and half decade have vultures been spotted anywhere except jungles,” said Pandey. Also, wild boars which are reclusive in nature and generally hide in dense forests due to human influence have been spotted out in the open in the district. Madhya Pradesh is blessed by nature, encountered by wild animals, stepped in history and alive by wildlife. There are nine national parks, six tiger reserves and 25 wildlife sanctuaries in the central Indian state.

Grocery in lieu of midday meals
With schools remaining closed and no midday meals available for children owing to the Coronavirus pandemic, the state education department has started the distribution of wheat and rice among hundreds of students at government schools. Also, money is being transferred in the accounts of the students to ensure that all those children have easy access to food in the ongoing tough period. But owing to the lockdown, the distribution of food grains among the students has been affected particularly in the remote areas of Madhya Pradesh.The nutritional norm for upper primary students is 700 calories and 20 grams of protein.

Congress veteran urges Chief Minister Shivraj Singh Chouhan to help students stuck in Maharashtra
Former Madhya Pradesh chief minister and Congress’ Rajya Sabha member Digvijaya Singh has written a letter to CM Shivraj Singh Chouhan seeking the safe return of 24 MP students stuck in Maharashtra. The students hailing from Bhopal, Indore and Ujjain are students of hotel management in Aurangabad district of the western state. Importantly, one of the teachers of the students had tested positive for COVID-19 a month ago, after which the students were quarantined. The students have already undergone the 14-day quarantining period successfully, but are staying put at their hostel since a fortnight. Also, all their test reports are negative and none of them have shown any symptom akin to the viral infection.