Maharashtra, Tamil Nadu and Delhi, which account for nearly half the coronavirus caseload, are leading the country on the road to recovery.

NEW DELHI:  Maharashtra, Tamil Nadu and Delhi, which account for nearly half the coronavirus caseload, are leading the country on the road to recovery. A clear decline of the disease is visible on at least three counts: a decrease in growth rate, an increase in doubling time and a reduction in positivity rate, an analysis of data by this newspaper of Unlock 2 period has revealed.

Maharashtra and Delhi, which figure on the first and fourth positions on the list of Covid-infections in the country, also registered a significant dip in the case fatality ratio by the end of Unlock 2 on July 31 compared to July 1.

Delhi has registered a complete turnaround and managed to do well on several counts, including bringing down its tally of active cases sharply by 61 per cent. "If the big states do even modestly well in improving the COVID-19 situation, it will have a significant impact on the overall situation in the country," said epidemiologist Jammi Rao, who has worked in public health both with in India and the UK.

During Unlock 2, 23 states, including large and populous states, bettered their own records. Of the total 36 states and Union Territories, as many as 15 showed noteworthy improvements in growth rate, doubling time and positivity rate compared to Unlock 1.

It was 1,80,298 cases as July began and the total case count by the month-end was 4,22,118. Although Maharashtra persisted with the highest caseload of Covid-19 and deaths in the country, it registered a dip in two important parameters: fatality ratio and growth rate.

With the second highest number of cases and deaths, the state managed to improve the situation significantly. While Tamil Nadu recorded 94,049 cases on July 1, cases on July 31 was 2,45,859. T

As for the positivity rate, on July 1 it was 12.23 per cent and on July 31 it came down to 6.25 per cent . Timely intervention followed by ramped-up testing and extensive isolation strategy of containment zones seem to have worked. While the growing graph of active cases began showing a decline in the second half of June, the city continued to maintain the trend in all of July.

It saw marginal improvement with the growth rate reducing from 2.15 per cent in June to 1.98 per cent in July and the doubling time increasing from 32.55 days to 35.35 days during the same period. 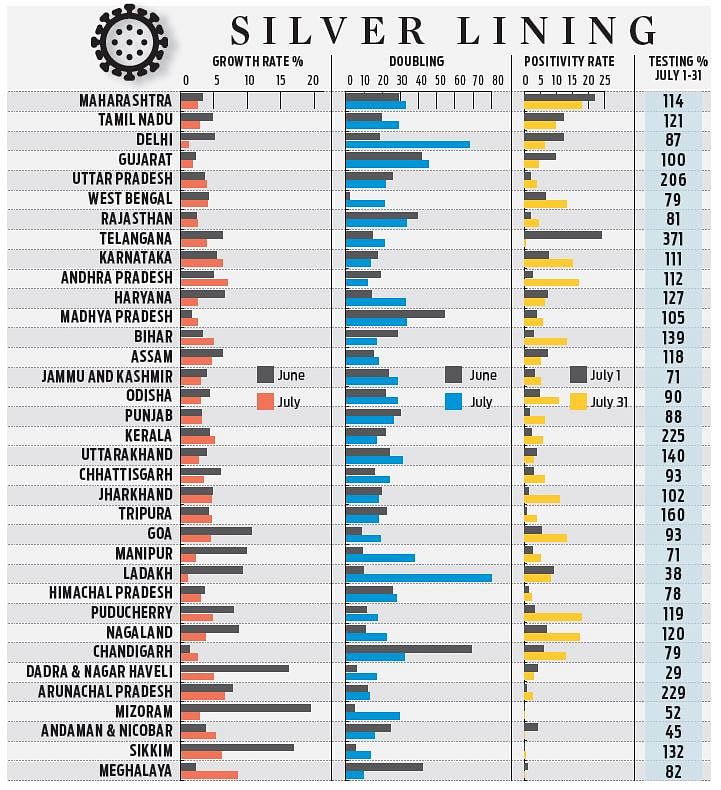 More from Nation.
Now we are on Telegram too. Follow us for updates
TAGS
COVID19 Coronavirus Unlock 2 covid recovery Maharashtra COVID TN covid