A fake Twitter account was created in the name of newly-appointed L-G Manoj Sinha to create confusion.

Fake Twitter account of L-G created; FIR lodged
A fake Twitter account was created in the name of newly-appointed L-G Manoj Sinha to create confusion. Taking serious note of this act, the cyber cell on Sunday, registered an FIR under against unknown persons under the relevant provision of the law to start an investigation to identify the culprits. Posting a copy of the fake account of L-G, head of the cyber cell Tahir Ashraf tweeted: “This is a Fake Twitter handle in the name of Hon’ble Lt. Governor, Shri Manoj Sinha. Cognizance taken, FIR registered.” Police said a fake account in the name of Sinha was created within hours after the announcement of his appointment was made. 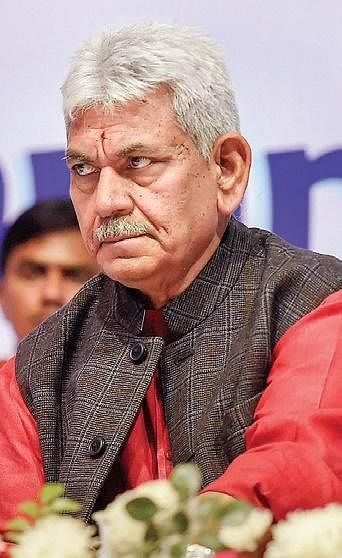 ‘Pay salary to teachers or face de-recognition’
The School Education department has warned the private schools of strict action for withholding salaries of teachers in lockdown period. A circular issued by Director School Education Kashmir (DSEK) Muhammad Younis Malik said the private schools will face de-recognition for terminating the teachers or withholding their salary during the ongoing Covid-19 pandemic. During the past few months, many teachers have been terminated by private schools while as hundreds of teachers have not received their salaries from March. A teacher from Baramulla said his salary has been withheld for not taking online classes during Covid-19 period. “I couldn’t take the classes after I tested Covid positive last June,” he said.

First-of-its-kind ‘Rock Garden’ soon
If everything goes as planned, Kashmir’s Ganderbal district is soon going to get first-of-its-kind “Rock Garden”.  The administration has identified 32 kanals of land and earmarked for the construction of Rock Garden adjacent to PDC Park near Kangan. The District Floriculture Officer, briefed the DC about the requirements and designing layout for creating a Rock Garden. A ‘Rock Garden’  is a type of small field or plot of ground designed to feature and emphasize extensive use of rocks and occasionally boulders, along with a few plants native to rocky or alpine environments.

Shocked by husband’s death, woman ends life
Shocked by her husband’s death, a woman ended her life by consuming poison on Saturday, police said. A police official identified the woman deceased as Kulsama Begum, a resident of Saidpora village. Her husband Awlad Ali Shah, 52, was admitted to Government Medical College, Baramulla a few days ago after his health condition had deteriorated. He died of cardiac arrest this morning, Uri SHO Mohammad Ashraf said. He said the woman was taken to Sub-District Hospital (SDH) Uri where doctors declared her dead on arrival. “The body was later handed after completion of all medico-legal formalities,” the SHO said.

Fayaz wani
Our correspondent  in Jammu and Kashmir fayazwani123@gmail.com