52 per cent in Pune exposed to COVID-19, finds serosurvey

This is the highest seroprevalence reported from any city in India so far, reveals survey

NEW DELHI: A serosurvey carried out in areas reporting high numbers of Covid-19 cases in Pune, Maharashtra has shown that nearly 51.5% of the samples tested had antibodies against the virus, making it the highest seroprevalence reported from any city in the country so far.

The survey results are being seen as significant because they reveal the extent and ease of silent spread in high-risk areas. The serosurvey was carried out by researchers from multiple institutions, including some central government’s scientific bodies, with the support of the district administration.

Pune is one of the Covid-19 hotbeds in India with 1,30,606 confirmed cases now and it long surpassed Maharashtra capital Mumbai in terms of official numbers of cases. The survey showed that the seroprevalence ranged from 36.1% in Kasbapeth-Somwarpeth to 65.4% in Lohiya Nagar-Kasewadi — two out of 5 high-incidence sub-wards where the exercise was carried out. Pune has 41 administrative sub-wards and at the time of the sample collection, between July 20-August 5, 12 sub-wards, with about 3.6 lakh or 12% of the city’s total population, were the worst-hit. For the survey, samples from 1,664 randomly chosen individuals were tested.

There was no difference between men (52.8%) and women (50.1%), while people of older age (above 66) have a lower prevalence (39.8%), the results showed.“Our study is adequately powered as we designed it to represent all categories of age, gender and residence type,” said Arnab Ghosh, one of the principal investigators of the project, who is attached with the Indian Institute of Scientific Education Research, Pune.

Other researchers associated with the exercise said that the findings have made Pune a place where epidemiologists can put to test this theoretical expectation of herd protection. “Pune Municipal Corporation has high granularity testing data which will allow them to check in the coming weeks whether the infection is slowing down or not specifically in areas with the highest seroprevalence,” said a researcher. “They also plan to study antibodies to see if they are neutralizing as unless the antibodies are protective, there can be no herd protection.A survey conducted in Mumbai had shown a seroprevalence of 57% in slums and 16% in other areas last month. 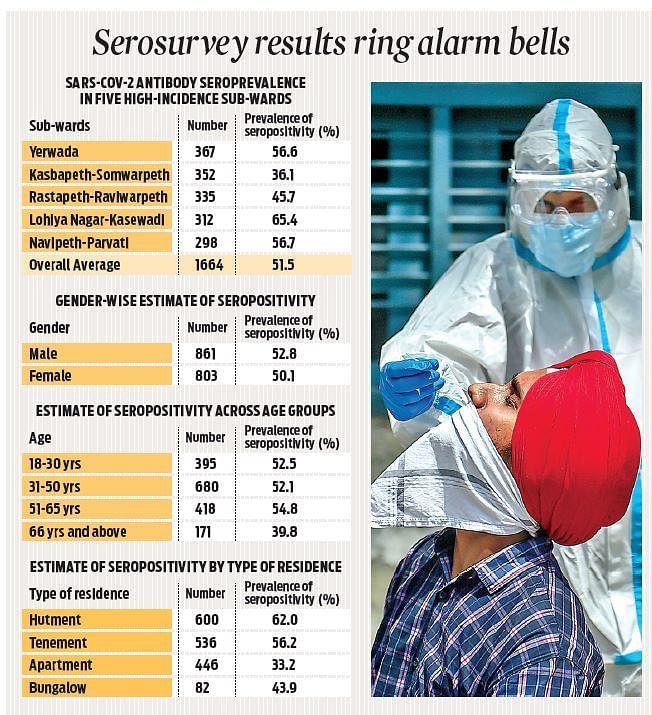 More from Nation.
Now we are on Telegram too. Follow us for updates
TAGS
serosurvey coronavirus