Prasad also alleged that Gandhi had “tried to pull down” the government in its fight against Covid-19 from day one.

NEW DELHI:  Hitting out at Rahul Gandhi, Union Law and IT Minister Ravi Shankar Prasad on Tuesday said the Supreme Court, with its decision, has destroyed the campaign sponsored by the Congress leader and his party against the PM-CARES Fund. 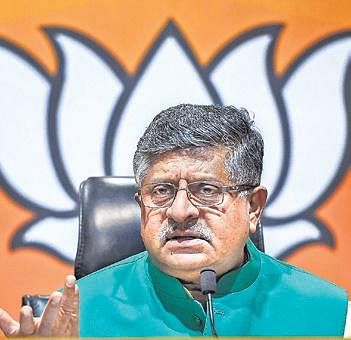 Prasad also alleged that Gandhi had “tried to pull down” the government in its fight against Covid-19 from day one. “Transparency is writ large in the PM-CARES Fund. It’s a public trust and its account will be audited. The Supreme Court has dismissed the petition to transfer the PM-CARES Fund to the National Disaster Relief Fund (NDRF),” said Prasad, while addressing a press conference at the BJP headquarters. The minister said a total of Rs 3,100 crore has been allocated to meet the challenges arising out of the Covid-19 pandemic.

“As many as 50,000 ventilators at a cost of Rs 2,000 crore have been procured from the expenses of the PM Cares Fund, while a sum of Rs1,000 crores was spent on the migrants. Also, a sum of Rs 100 crore has been allocated for the scientific works on the Covid-19,” added Prasad. The minister said the Opposition has not yet got one issue of corruption against the Narendra Modi government.

“The Modi government works with full honesty and gets the mandate of the people also for the same reason. The PM-CARES Fund is functioning with the same honesty,” added Prasad. BJP chief J P Nadda also hit out at the former Congress chief, saying: “The PMNRF for decades was administered as a personal asset, and the money of the people were transferred to trusts owned by the family.”

More from Nation.
Now we are on Telegram too. Follow us for updates
TAGS
PM-CARES Fund.