Remember the 28-year-old hearing impaired Geeta who returned from Pakistan in 2015? She was not able to trace her roots in the country.

BHOPAL: Remember the 28-year-old hearing impaired Geeta who returned from Pakistan in 2015? She was not able to trace her roots in the country. Geeta  is staying in Indore with organisations looking after the differently abled. But the police continue to trace her roots; the update is she is either from south Chhattisgarh or adjoining Telangana. 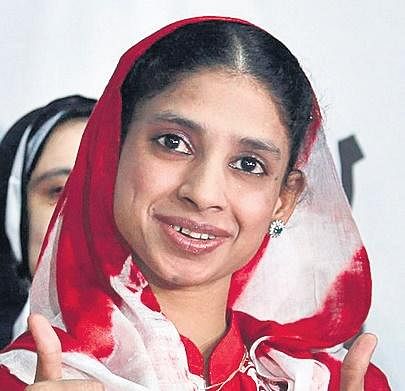 “Recently, the administrators of an organization with whom she is currently staying in Indore approached us saying Geeta was under depression and desperately wanted to be reunited with her parents,” Indore DIG Hari Narayan Chari Mishra told TNIE.

The Indore police engaged sign language experts for Geeta’s psychological counseling. “During a session, Geeta showed inclination towards lifestyle, food and music of south Chhattisgarh districts and adjoining north Telangana districts. She reacted strongly to the music, food and culture of these areas, besides reacting strongly and taking deep interest in watching Telugu movies.” The Indore Police strongly believe that her recent counseling by sign language experts and psychologists has indicated that Geeta could be originally from the Bastar-Sukma region of Chhattisgarh or the adjoining Bhadrachalam and other districts of north Telangana.

“We’ll start working with our counterparts in both the regions on the possibility of Geeta’s family being somewhere in that region,” Mishra said. Geeta was brought back to India in October 2015 following efforts by then Minister of External Affairs Sushma Swaraj. She was hardly 10 when she had inadvertently crossed the border into Pakistan aboard the Samjhauta Express in 2003. Since her return to India in 2015, many families across the states have staked their claim for being Geeta’s parents. But the DNA samples of none of these claimants have not matched with Geeta’s.

How she got name
Geeta was spotted by Pakistan Rangers in Lahore and was handed over to activist Edhi Bilquis Edhi, who runs a foundation. It was during her stay with Edhi that she got her name Geeta.

More from Nation.
Now we are on Telegram too. Follow us for updates
TAGS
Geeta Pakistan Chhattisgarh Telangana