The biggest blow was for BJP which finished third and the second spot went to a large number of independents who emerged victorious.

JAIPUR: Days after suffering a setback in panchayat polls, the ruling Congress in Rajasthan bounced back with an impressive show in the municipal elections in the state.

Of the 50 municipal bodies that went to polls, the Congress emerged as a clear  winner in 620 of the total 1,775 wards. 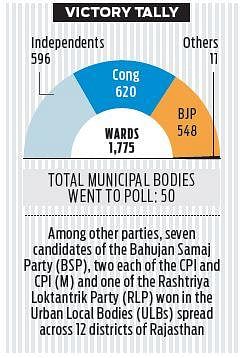 The biggest blow was for BJP which finished third. The second spot went to a large number of independents who emerged victorious.

The independents candidates bagged 596 wards, while the BJP could win only 548 wards.

The Congress has emerged victorious in urban centres traditionally considered BJP bastions while the saffron party which did better in last week’s panchayat polls seems to have weakened in its strongholds in towns and cities.

The Congress has done particularly well in Jaipur district where it won 6 of the 10 ULBs.

Similarly, in Sri Ganganagar district the Congress won 5 of the 8 municipal bodies that went to polls.

The BJP did better than the Congress only in Bharatpur district where it won 6 of the 8 urban bodies, while in Alwar district the Congress and BJP won 3 ULBs each.

BJP state president Satish Poonia, however, had a different take.

Despite the BJP finishing third, he claimed that the results have gone against the Congress as the BJP and independent leaders won more than 60 per cent seats.

He remarked that this implies that the “mandate has gone against the Congress”.

Now we are on Telegram too. Follow us for updates
TAGS
Rajasthan Urban local body polls Rajasthan UBL BJP Congress