The survey also showed that students in rural areas spend more on transport than children in towns and cities.

NEW DELHI: Students in rural India spend 10 per cent more on items such as books, stationery and uniform than their counterparts in urban areas, showed a surprising finding in the Economic Survey, tabled in Parliament on Friday.

“The second-largest component of average expenditure on education by student is books, stationery and uniform where an average student in the rural areas is surprisingly spending more than 10 percentage points as compared to urban areas,” the Survey, quoting the 75th National Sample Survey, said.

The survey also showed that students in rural areas spend more on transport than children in towns and cities.

It further said that students pursuing education in private aided institutions are spending significantly higher as compared to government institutions across rural-urban India.

Pointing at low gross enrollment ration — mainly after higher secondary level — the Survey said the underprivileged sections prefer to engage themselves in economic activities for survival.

The absence of suitable financial support system and high burden of course fee, especially in higher education, pushes them out of the education system, it said.

The second-largest component of average expenditure on education by the student is books, stationery and uniform. The largest component, as expected, is the course fee which is 50.8 per cent at all-India level 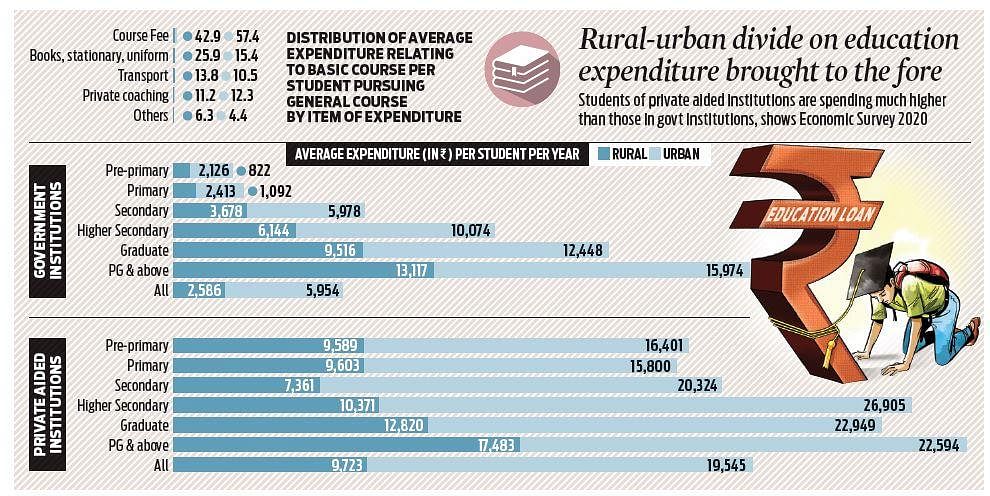 Stay up to date on all the latest Nation news with The New Indian Express App. Download now
(Get the news that matters from New Indian Express on WhatsApp. Click this link and hit 'Click to Subscribe'. Follow the instructions after that.)
TAGS
Economic Survey 75th National Sample Survey Economic survey 2020