Punjab has argued that punishment for possession of drugs is much less stringent in India as compared to the West and encourages its smuggling.

CHANDIGARH:  With Punjab turning into a huge consumer base and transit point for drugs from Afghanistan and Pakistan, the government has sent an SOS to the Centre to introduce a stricter law in the wake of seizure of 1,294-kg of heroin between March 2017 and January 2020.

Punjab has argued that punishment for possession of drugs is much less stringent in India as compared to the West and encourages its smuggling.

“The Government has written to the Union to amend the Narcotics Drugs and Psychotropic Substances (NDPS) Act to make punishment for small seizures of heroin more stringent,” said an official. The present legal limit to hold 250gm should be brought down to 25gm by amending the NDPS Act,” he added.

“The bulk of the cases registered in the state are of intermediate quantity of recovery of heroin-less than 250 grams-in which the accused gets bail and continues with drug trafficking,” say officials. As per the present provisions of the NDPS Act, a person can be imprisoned for 6 months for recovery of less than 5gm of heroin and fined Rs 10,000. The offence is, however, bailable. For bigger seizures, one can be imprisoned for up to 20 years with fines up to Rs 2 lakh.

Officials say, smugglers take advantage of the fact that trafficking of intermediate quantity protects them from potential long imprisonment. They supply heroin mostly between 5 to 250 grams through multiple peddlers to circumvent the law. The persons arrested are repeat offenders. An amended act would help nail them, they add.

Supporting the plea for limiting commercial quantity to 25 gm, Narcotics officers cite US laws where arrest with 25 gm of heroin earns a 30-year in prison and up to 1 million dollar fine.
In New South Wales, Australia a 3gm seizure means 15-year imprisonment while Cyprus slams a life term. 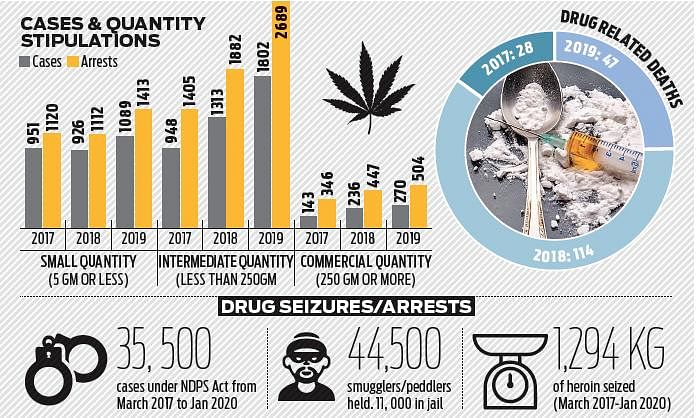