The government has to provide essential infrastructure along with power supply and other amenities such as the internet.

DEHRADUN : The Uttarakhand government has drafted a plan to provide a minimum 100 days of work, through the Mahatma Gandhi National Rural Employment Guarantee Act 2005, to arrest migration from the hill state, which also has national security implications. The Rural Development and Migration Commission report, released in 2018, had shown that because of rapid migration some villages in the state have been left with a population in single digits. The report also showed that over 500 villages have seen around 50% migration and this has made them turn into ghost towns.

“Villages, which are the worst affected, have been chosen for the initiative. We will make sure that 100 days of work is provided so that people don’t have to leave their homes,” Udayraj Singh, additional secretary, MGNREGA, Uttarakhand said. Last year during his visit to Uttarakhand, Chief of Defence Staff Gen Bipin Rawat, who was then the army chief, had raised the issue of migration.

He had said that the Indian Army will extend support to provide basic facilities, such as roads and telecommunication services, in the villages adjacent to the international border at Indo-China border. Uttarakhand shares the international border with China and Nepal. China disputes the alignment of the border and there have been several incursion attempts over the years by Chinese troops. So there is an urgent need to prevent depopulation of border villages Nainital-based historian Shekhar Pathak, a Padma Shri awardee, said, “The state government has to do more than this.

The government has to provide essential infrastructure along with power supply and other amenities such as the internet. Preservation of population of the hills is of vital importance because of cultural as well as strategic significance.” According to the state government, since the 2011 Census, a total of 734 villages have become completely depopulated and turned into ‘ghost villages’. Out of these, around 20 are adjacent to the international borders. On several occasions CM Trivendra Rawat has raised an alarm about migration. “Our villages are slowly getting vacated. The issue of migration is real.” 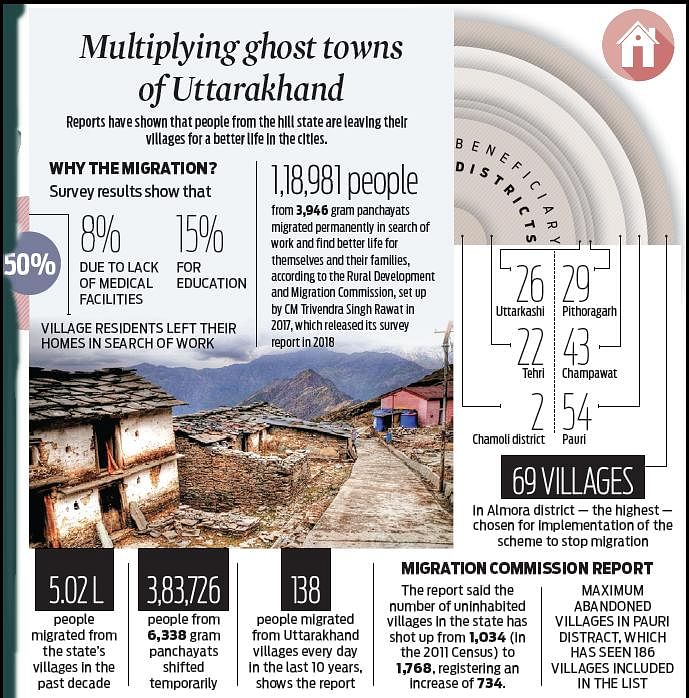