While 14 lakh workers are getting work, only 10,000 of them are fortunate enough to get work for more than 100 days in a financial year.

CHANDIGARH: Only about 3 per cent of registered workers are getting jobs for 100 days in Punjab under the Mahatma Gandhi National Rural Employment Guarantee Act (MGNREGA). While 14 lakh workers are getting work, only 10,000 of them are fortunate enough to get work for more than 100 days in a financial year.  This hurts rural households as daily wages is on the lower side — workers get `241 per day in Punjab, whereas Haryana pays ` 284 per day.

Incidentally, NITI Aayog’s SDG Index 2019-20 report revealed employment under MGNREGA come down from 81.63 per cent to 76.12 per cent in Punjab. In its Lok Sabha poll manifesto, the Congress had promised to ensure 150 days to rural workforce under this scheme. But if the numbers are considered, only a miniscule portion of daily wage earners are meeting the threshold of 100-day employment.

But Rural Development and Panchayats, principal secretary, Seema Jain says the state has seen in a consistent improvement in MGNREGA performance in last three years. “The overall expenditure was well above in terms of total man days generated.  As of now 205 lakh man days have been generated in the present financial year and `656 crore spent. There is still six weeks for the financial year to close. We have already exceeded our target. This scheme has empowered women and generated employment,’’ Jain said.
One of the reasons blamed for this poor performance is the lack of awareness and illiteracy among workers. The SOP is that workers register for work following which they are informed about the details of assigned work through a work allotment letter. But, it was found that this procedure is largely sidestepped as workers are not aware of their rights because of illiteracy

It not only leads to irregularities but also causes delay in the release of payment. Sources said that there was a delay in payments of MGNREGS wages for a few months last year. In November last year, the Punjab government dismissed five employees of the rural development department for their involvement in a `2.59 crore scam in the scheme. These employees allegedly submitted fake payment receipts and indulged in other irregularities.

Problem of plenty?
As per records, there are a total of 28 lakh workers in rural areas who have enrolled themselves in the job scheme. Almost half them fail to get employment for some reason or the other.

Last year, the Congress in its Lok Sabha manifesto had promised to provide 150 days of work under this scheme 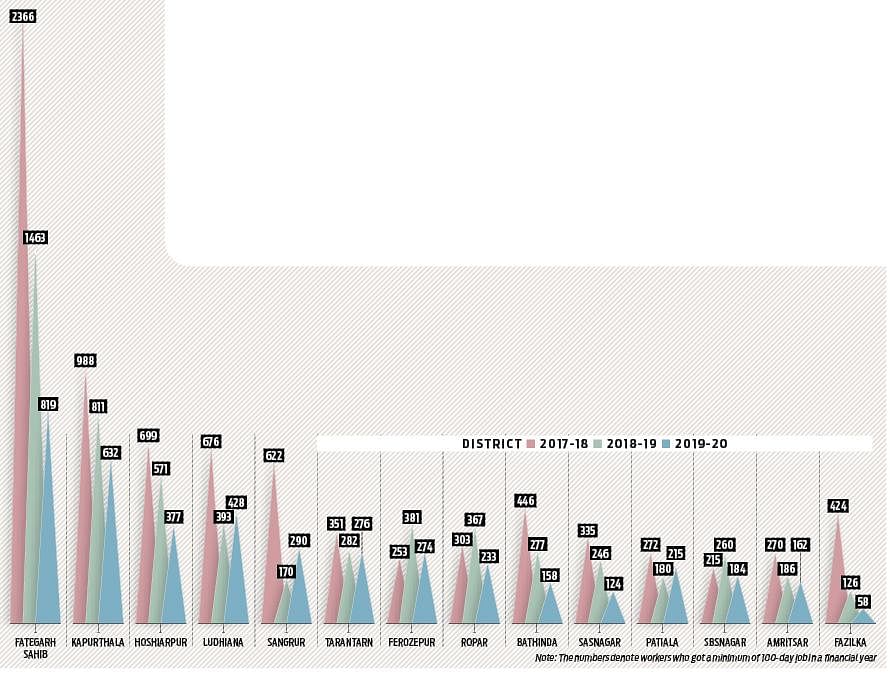 Stay up to date on all the latest Nation news with The New Indian Express App. Download now
TAGS
MGNREGA