Ujjwala runs out of gas in Uttarakhand

Out of the 3.72 lakh people who were provided with LPG connections under the scheme, only about 3,500 have been able to refill their cylinders for regular use.

DEHRADUN: The Centre’s flagship ‘Ujjwala Yojana’, as part of which LPG connections are provided for free to households considered ‘below poverty level’ (BPL), has, by all appearances and records, failed to yield the desired benefits in Utrarakhand.It turns out that over 99 per cent LPG holders, under the Ujjwala scheme, haven’t been able to refill their cylinders.

According to official records, out of the 3.72 lakh people who were provided with LPG connections under the scheme, only about 3,500 have been able to refill their cylinders for regular use. Most said they were struggling to dip into their meagre household budget to meet the rising cost of LPG.Madan Kaushik, a member of the Uttarakhand cabinet and a spokesperson for the government, said, “LPG connections (under the Ujjawala scheme) were provided to women to make their lives easy and we are committed to ensuring that the larger objective behind the scheme is fulfilled.”

Deepa Devi from Mayali in Rudraprayag, said, “The cost of hiring a vehicle or a mule for a ride uphill to have the cylinder delivered is anywhere around `100 and `300. It is more than what we can afford.” While the price of non-subsidised LPG was hiked by `144.5 per cylinder last week, the government doubled the subsidy from `153.86 to `291.48 to ensure the beneficiaries doesn’t feel the pinch. Prabhat Verma, deputy general manager, Indian Oil Corporation, said, “We get over 3,500 refilling requests from Uttarakhand. The refilled cylinders are moved to the agencies from where they are distributed to the LPG holders.”

Under the Centre’s flagship ‘Ujjwala Yojana’, LPG connections are provided for free to BPL households across the country. The scheme is aimed at empowerment of underprivileged women

3,500 LPG holders in the state under the central scheme are able to refill their cylinders for regular use 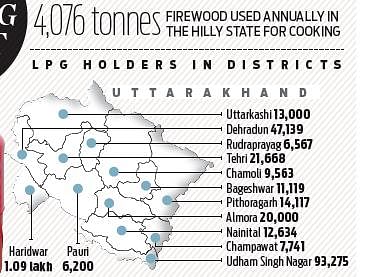 Stay up to date on all the latest Nation news with The New Indian Express App. Download now
TAGS
Ujjwala Yojana