Uttarakhand government to bring in agritourism

DEHRADUN: To boost tourism on the lines of European vineyard tourism and Japanese strawberry tourism in Uttarakhand, the state government will soon be introducing 'Agri-tourism' in the state. Subodh Uniyal, state agriculture minister said, “The agro tourism has immense potential in Uttarakhand and we have orchards and gardens of many fruits, flowers, medicinal plants. It will give a boost to tourism sector.” The initiative will be focusing on hilly districts of Uttarakhand where fruits like apple, pear, peach, plum, khumani and walnut are grown in orchards, fields deploying different methods.

The state leads in the production of pear, plum, peach and apricot while stands second in the production of walnuts and tanha their in production of apples across the country. The department has planned development of the existing farms and orchards in the state for tourism purpose, added officials. The idea sprung up after a recently concluded vistar of delegation to Japan including the minister. "In Japan we witnessed that a ticket is required to visit a strawberry farm and one can consume as much as one like to without intending any damages.

However, anyone cannot carry away or collect the strawberries home," said the minister. The officials from the agriculture department said that the state government will approach the farmers if the state with a proposal to share the profit. "It will benefit all the stakeholders including farmers, the tourist and the visitor. This way the scheme could be game changer," said Uniyal. 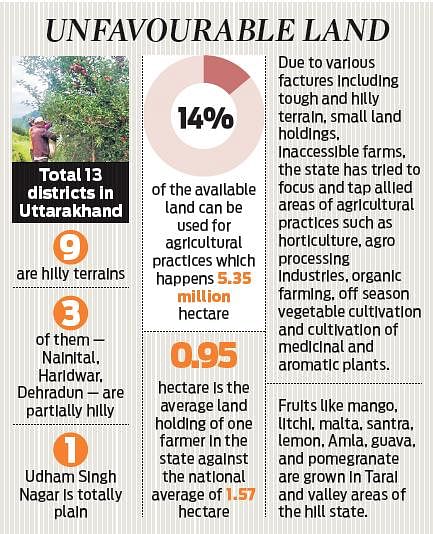 Stay up to date on all the latest Nation news with The New Indian Express App. Download now
TAGS
agri tourism