Conflicts over common land affect over 5 million people in India, according to a report by Land Conflict Watch, a research organisation.

NEW DELHI:  Conflicts over common land affect over 5 million people in India, according to a report by Land Conflict Watch, a research organisation.

The total number of conflicts identified is 703, according to the report. These 5 million people are around 79% of the people affected by land conflicts.

In over 35% cases, acquisition of private lands was a reason for cases which impacted over three million people and contributed to 71.4% of investments locked in such conflicts.

There were more conflicts in forested land as compared to non-forested land, according to the report.

With 12% of India’s districts affected by Left-wing extremism, the districts account for 17% of the total conflicts, and 15% of the impacted, the analysis showed.

It said 48% of conflicts in areas affected by LWE involve common lands and 8% involve private lands.

Conflicts over private lands impact, 4% of the conflict-affected in such areas.

The other findings showed the percentage of mining and conservation and forestry-related conflicts in LWE areas was more than double the national average.

The fifth scheduled areas which are spread over 13.6% districts, are home to 26% of the total conflicts and impacted 28.5% of the total people impacted.

These areas had higher concentrations of and intensities of land conflicts. 74% of those impacted were connected to conflicts over both common and private lands. 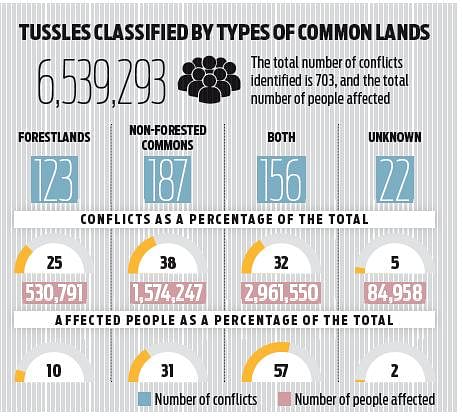