Tiger deaths drop below 100 for first time in four years

The major reason for tiger death continues to be poaching, infighting, natural death and human-tiger conflict among others.

NEW DELHI: For the first time in four years, tiger deaths dropped below 100 with 95 big cats dying in 2019 due to natural death and poaching, data from the National Tiger Conservation Authority (NTCA) revealed. The tiger mortality was 101, 110 and 121 for the three consecutive years before 2019.

The major reason for tiger death continues to be poaching, infighting, natural death and human-tiger conflict among others. States of Madhya Pradesh, Maharashtra and Karnataka reported the highest number of tiger deaths last year. Interestingly, the All Indian Tiger Estimation 2018 saw Madhya Pradesh recording an increase of over 200 tigers and Karnataka over 100 in the last four years.

However, the Wildlife Protection Society of India (WPSI) data for 2019 puts tiger deaths at 110. In a cause of worry for the authorities, 57 tiger died inside the tiger reserves, which are a designated protected area while 38, nearly one-third, reportedly died outside boundaries of tiger reserves.

The cause of tiger deaths in majority of these cases is yet to be confirmed. There are 50 tiger reserves in the country. Going by the data, the year 2016 was worst for the big cats with 121 tiger deaths, which was much higher than 82 deaths in 2015. India is home to world’s largest tiger population in the wild with the 2018 tiger census putting the numbers at 2,967.

The census clearly highlights that tiger habitat corridors are often threatened by development of linear infrastructure and called for careful spatial planning to avoid traversing critical habitats and their linkages, along with appropriate mitigation through wildlife passageways to ensure that tigers and biodiversity conservation is not compromised by modern development.

Experts have warned that the country needs to focus on community involvement to protect the big cats keeping in mind over 30-40 per cent tigers living outside tiger reserves. 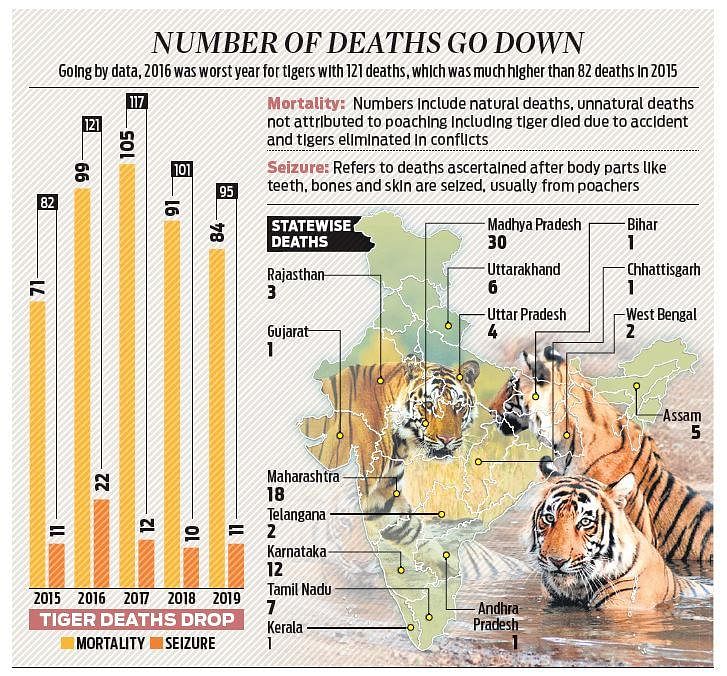