Punjab slips on poverty index but up on growth

CHANDIGARH: Punjab experts have contested findings of the Niti Aayog by which the state has slipped overall by two points to figure at 12th spot among 36 states on various development indices.

The Niti Aayog’s Sustainable Development Goal India Index 2019-20 report states that Punjab-known as the food bowl of India-has slipped on the Zero Hunger goal from 71 points in 2018 to 61 points in 2019 and from 56 points to 48 on poverty rankings.

The report is based on 17 goals covering 100 indicators.  Of concern is that in ensuring ‘Zero Hunger,’ Punjab has slipped to ‘performer’ category from being a ‘frontrunner.’

With the state slipping to 62 points on composite SDG figures, it has not found mention among the top three states on any of the 17 indices used for evaluation of states and UT’s on development parameters.
Sucha Singh Gill agriculture economist and former director-general of Centre of Research for Rural and Industrial Development said, “The state has slipped on the parameters of ‘Zero Hunger’ and ‘No Poverty’ due to rising unemployment in the agriculture sector where intensive human labour has been displaced due to widespread mechanisation.”

He said, landless labourers were getting work in the non-farm sector but due to the slowdown in the economy, many are floating back to agriculture but not landing work. This has affected their nutrition also.”

Agriculture economist Prof Sukhpal Singh of IIM, Ahmedabad said, “Poverty was never eradicated in Punjab but had only decreased. The state never implemented MGNREGA properly. Stipulating just 10 days employment during the wheat season and 20 days for paddy per year, accentuated the crisis among farm labour.

Principal Secretary (Food Supplies), Punjab, KAP Sinha said he had ‘not seen the Niti report’ and would react once it has been examined.

Punjab Health Minister Balbir Singh Sidhu, however, blamed the ‘wrong policies of the Centre which led to the economic slowdown, factory shutdowns and business losses resulting in unemployment. Despite that, “I do not think there is anyone who sleeps hungry,” he said.

However, the state has climbed 3 points to 46 in ensuring gender equality and managed to retain its 71 points in ‘ensuring good health’ of people, even as it slipped on sex ratio to 833 females per 1000 males against the national average of 896. 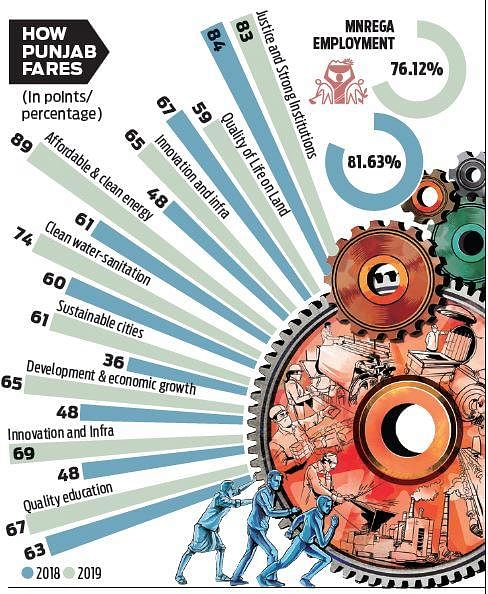 Stay up to date on all the latest Nation news with The New Indian Express App. Download now
(Get the news that matters from New Indian Express on WhatsApp. Click this link and hit 'Click to Subscribe'. Follow the instructions after that.)
TAGS
Punjab Niti Aayog poverty index

'Bangladeshi terrorist' on lookout for me, claims BJP's Kailash Vijayvargiya