Gender bias in choosing private schools over government ones: Survey

It also said that early learners in the age group of four to five years who study in anganwadis or government schools are at a disadvantage compared to their counterparts in private schools.

NEW DELHI: The Annual Status of Education (ASER) report, based on a survey to assess learning outcomes in school-going children, has revealed gender disparity in parents opting for private schools over government schools for kids aged 4-8.

While nearly 50 per cent boys in the age group go to private playschools or schools, this percentage is nearly 43 for girls, the survey carried out by NGO Pratham said.

It also said that early learners in the age group of four to five years who study in anganwadis or government schools are at a disadvantage compared to their counterparts in private schools.

ASER has been carried out since 2005, and its findings on learning outcomes of school-going children are considered significant.

This year’s report on early learners said that while by the age of five, most children should be able to perform simple tasks like a four-piece puzzle, children from less-advantaged homes are “affected disproportionately”.

“Although almost half of the four-year-olds (44.2 per cent) and more than a quarter of all five-year-olds (26.3 per cent) are enrolled in anganwadis, these children have far lower levels of cognitive skills and foundational ability than their counterparts in private LKG and UKG classes,” it says.

Cognitive skills refer to a child’s ability to sort, arrange, and recognize patterns, while foundational ability refers to the basic knowledge of language and numbers. 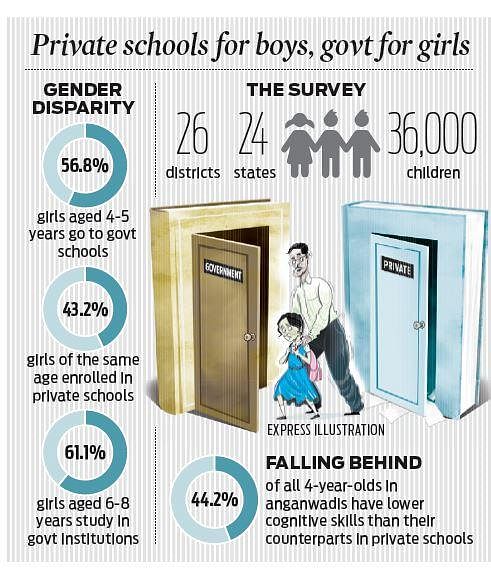 Stay up to date on all the latest Nation news with The New Indian Express App. Download now
(Get the news that matters from New Indian Express on WhatsApp. Click this link and hit 'Click to Subscribe'. Follow the instructions after that.)
TAGS
Annual Status of Education NGO Pratham School Education in India