A total of 85 hail events and 80 squall events were recorded over the country in 2019.

NEW DELHI: Severe weather events like thunderstorms and squalls registered a jump in 2019, as compared to the previous few years, with changes in the weather pattern recorded across the country.

The monitoring of severe weather events was carried out over entire India from March 1 to June 30, 2019 (122 days) to collect data on such episodes like thunderstorms, squalls and hailstorms.

A comparative study of thunderstorm days for the country as a whole for 2015 to 2019 indicates, that in 2019, the number of thunderstorms days were more than all the previous storm seasons since 2015.

However, region-wise thunderstorm days for all the regions, except east India, have decreased as compared to 2018.

On comparing the frequency of hail events during storm periods 2015 to 2019, it was seen that hailstorm activity considerably increased over northwest India with 51 hailstorms recorded in 2019 against 21 in 2018.

During the entire five year period, thunderstorm activity was more pronounced over the northeast and western India in 2016 and over east, northwest, central and peninsular Indian in 2015.

A total of 85 hail events and 80 squall events were recorded over the country in 2019.

As for hail events, they were mostly reported from hill states of Uttarkhand (15), Himachal Pradesh (13), Sikkim (13) and Jammu and Kashmir (12). 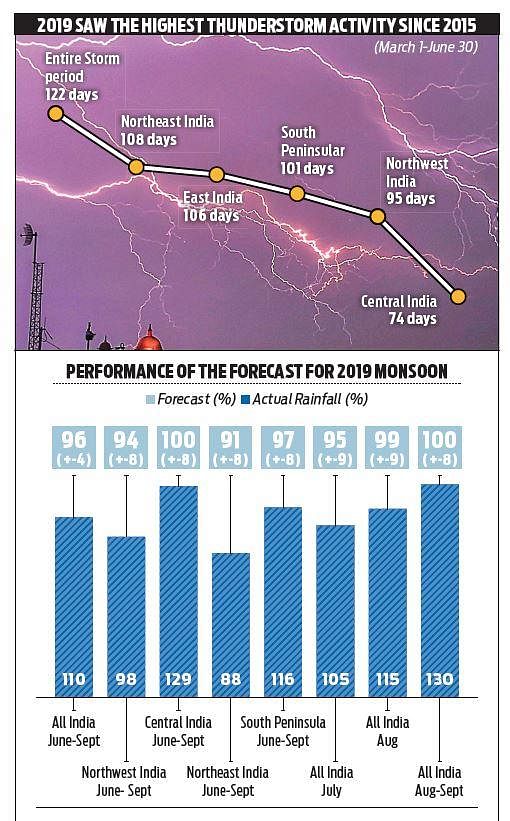