A Joint Parliamentary Committee (JPC) to which the bill has been referred, put out a notification on Thursday seeking people’s views.

NEW DELHI: The Centre wants to pass the Personal Data Protection Bill, which will allow data to be stored abroad with consent and with mirror images in India, in the forthcoming budget session of Parliament. 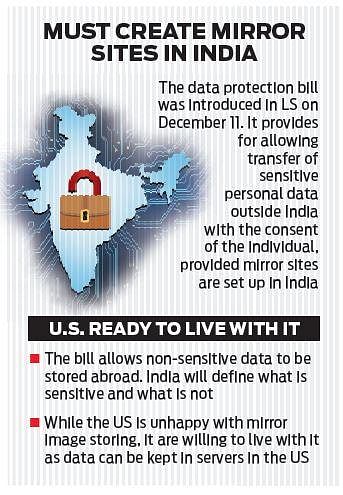 A Joint Parliamentary Committee (JPC) to which the bill has been referred, put out a notification on Thursday seeking people’s views. Based on public hearings, the JPC will report back to Parliament with its recommendations. “We hope those (recommendations) will be ready before the end of the extended budget session and the bill will be passed in the second sitting of the budget session itself,” officials said.

Americans have been dead against India forcing US-based firms like Google, Facebook and Mastercard to keep mirror data storage facilities in India, as it involves extra costs and lets Indian agencies access the firms’ proprietary data.

“We’ll also push for free flow of data across borders,” US Secretary of State Mike Pompeo had said last year in India’s context.

However, officials said that talks with the US Commerce Department as well as other officials have led them to believe that while the Americans were unhappy with mirror image storing, “they are willing to live with it” as data could still be kept in servers in the US.

The bill allows the Centre access to the data “in the interest of security, public order, sovereignty and integrity of India and friendly relations with foreign states” and to prevent any cognizable offences — provisions that activists say can be misused by the state.