Of the 243 assembly seats, the party has prepared a list of those falling in three categories — A, B and C — with wining probabilities keeping in mind caste equation.

NEW DELHI:  Realising that delay in alliance formation in Bihar dented the Mahagathbandhan’s chances during the Lok Sabha elections, the Congress is pushing for alliance in the state to be in place by May for the assembly elections scheduled later this year. In fact, the party has already shortlisted seats with better winnability chances.

Of the 243 assembly seats, the party has prepared a list of those falling in three categories — A, B and C — with wining probabilities keeping in mind caste equation. The Congress is in a bad shape in Bihar with no district or block level committees in many regions of the state.

“We want an early alliance to be in place for Bihar elections and we are doing our homework for the same. During Lok Sabha polls, the announcement of alliances was pushed till the last minute and it didn’t travel well to the party workers on the ground. As a result,  there was a lack of coordination between party workers,” AICC Bihar in-charge Shakti Sinh Gohil told this newspaper.

The party feels that in 2015, seat-sharing formula between JD (U)-RJD-Congress alliance was in place much in advance as it was taken care of by Nitish Kumar and that helped the alliance’s coming to power before Kumar parted ways.

The alliance talks between RJD, Congress, Upendra Kushwaha’s RLSP, Jitan Ram Manjhi’s Hindustani Awam Morcha and Mukesh Sahni’s Vikasheel Insaan Party lingered on during Lok Sabha polls. It was finally announced nearly a week before the first phase of polling in the state.

Gohil says that instructions have been given to state president to constitute district and block committees on priority basis and first round of assessment is already over.

With the RJD announcing that it will contest at least 150 of 243 seats and projecting Tejashwi Yadav as CM’s face, Congress leaders are in a fix as Bihar unit has told the party high command that they cannot win under him.

“It would be difficult for the party to win even 5 seats if Tejashwi is declared CM candidate of the mahagathbandhan and party should not agree to contest under him,” said a senior Bihar Congress leader. 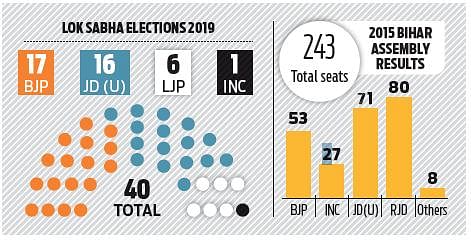 Stay up to date on all the latest Nation news with The New Indian Express App. Download now
(Get the news that matters from New Indian Express on WhatsApp. Click this link and hit 'Click to Subscribe'. Follow the instructions after that.)
TAGS
Congress RJD JDU LJP BJP Bihar Assembly Elections 2020 Bihar Polls 2020 Tejashwi Yadav