COVID cases, deaths continue to rise in India and the infection peak is nowhere in sight. As we figure out the way forward, it will be useful to turn an eye to our past experience with a pandemic.

CHENNAI: The 1918-1920 influenza ripped through a completely unprepared Indian population, killing an estimated 15 million people and leaving river mouths choked with dead bodies. Without modern medical science, people didn’t even know what was causing the disease and it was impossible to have a vaccine or antibiotic.

Oddly, some important things remain the same in 1918 and 2020: Quarantine is the primary way to contain the spread; and health systems have once again been pushed to the point of breaking. What lessons can we learn from that dark period of history?

Professor Siddharth Chandra, director of the Asian Studies Center at Michigan State University, said the government in British India recognised that it was hopeless to expect social distancing, given the high population density in many areas.

The government turned its attention instead to boosting health infrastructure and increasing access to health officers in rural areas.

“These lessons are as relevant today as they were in 1918. The population of India has grown dramatically over the past century, and population density has increased as a result. Emergency hospital accommodations are, therefore, limited. However, efforts are being made to expand this capacity,” Professor Chandra told TNIE.

A government Sanitary Commissioner’s report lamented that in Delhi in 1918, “the resources of the medical department were taxed to the utmost”, echoing a similar situation today where people with other serious illnesses are being turned away from hospitals.

“It is likely that, today, the healthcare system will again become overburdened in locations in which the spread of the disease is uncontrolled,” Chandra warned.

But our healthcare system is much better now than it was in 1918 and a race is on to produce and make available a coronavirus vaccine by 2021.

Educating people repeatedly on the dangers of the disease will help prevent a repeat of 1918.

More investment in healthcare will help too. And with our modern advantages such as testing  and drugs, it is possible to get the economy back on track while keeping the virus in check. 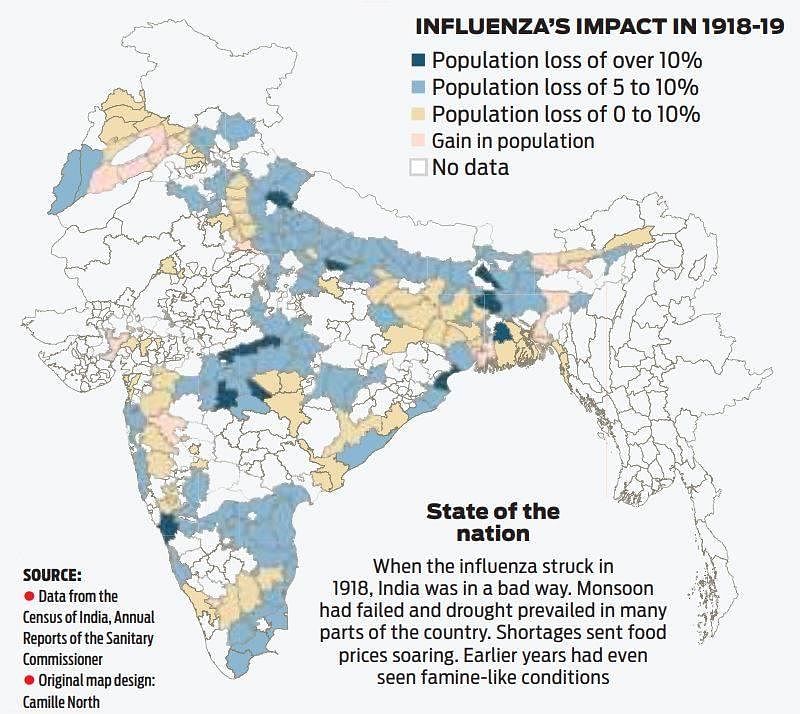 Head count: The map shows estimated declines in population in 1918-19, adjusted for normal growth every year. The districts highlighted here recorded deaths of 10.82 million people during the time when the pandemic struck.

Huge losses along coasts: Southern Indian districts on the west and east coasts recorded heavy losses in population. Districts in present-day Uttar Pradesh, Bihar and Tamil Nadu also saw a fall in population during the pandemic.

The numbers can be found in research papers: