Amul's Twitter handle could be accessed when checked on Saturday afternoon and the post containing the cartoon was also visible.

AHMEDABAD: The Twitter account of Amul was briefly blocked, sparking public outrage, but the social networking and microblogging firm on Saturday said the account was restricted after being caught in the platform's security processes.

Some sought to link the blockage to Amul advertising for use of its Make in India product and boycott Chinese products.

Amul had posted 'Exit the Dragon' tweet on June 3 afternoon and its account went down on June 4 evening.

On accessing the account, a message saying "This account is temporarily restricted. You're seeing this warning because there has been some unusual activity from this account. Do you still want to view it?" was displayed. 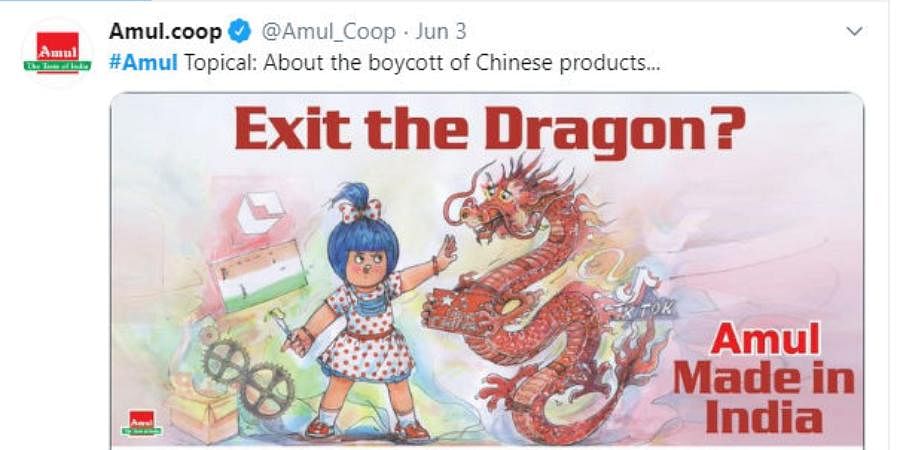 "Safety and security of the accounts is a key priority for us and to ensure an account has not been compromised sometimes we require the account owner to complete a simple reCAPTCHA process. These challenges are simple for authentic account owners to solve, but difficult (or costly) for spammy or malicious account owners to complete," a Twitter spokesperson said in an emailed statement.

"To protect the accounts, we routinely require them to clear this security key for login verification," the spokesperson said.

Amul Managing Director RS Sodhi said the company's Twitter account was blocked on the night of June 4, and restored on June 5 morning when the issue was taken up with Twitter.

"Our Twitter account was blocked on the night of June 4 and restored on June 5 morning when we again took up the process of reactivation with Twitter. We have asked Twitter why it blocked our account. We are waiting for the reply," he said.

Twitter was abuzz with several users expressing shock, while many questioned its move to restrict the account.

Twitteratis linked the restriction of Amul's account with the brand's campaign, supporting boycott of Chinese products.

The brand figured among trending topics in India even on Saturday with over 11,500 tweets.

In the campaign, Amul's iconic girl in white and red polka dots dress is seen fighting a dragon that is carrying a 'Made in China' placard.

The creative carries a tagline 'Amul Made In India' referring to Prime Minister Narendra Modi's call for self-reliant India.

"As far as the cartoon is concerned, it is not Amul's comment. Amul butter girl comments on the mood of the nation and the topics which are in discussions among the common people," Sodhi said.

He said the Amul girl campaign is on since the last 55 years, and the mascot generally talks about topical subjects, reflecting the mood of the nation in a funny way.

"When we learnt about this, we asked for clarification. We do not know why this disruption occurred. We have not yet received any official message from Twitter on this," Sodhi said.

Stay up to date on all the latest Nation news with The New Indian Express App. Download now
TAGS
China Amul Twitter