Nepal’s aggression comes a week after it put out a new map showing three territories in Uttarakhand as belonging to it.

PATNA: Repair works on the embankments of a border barrage, traditionally carried out by India on both sides, have been blocked for the first time by Nepal, leading to anxiety in Bihar. Barricades have been put up by Nepal to prevent the entry of men, materials and machinery from the Indian side to repair its embankments.

Nepal’s aggression comes a week after it put out a new map showing three territories in Uttarakhand as belonging to it. Sources said, the repair works of the Gandak barrage, being done by Bihar’s Water Resource Department, have been going on for a long time. But on June 15, the Nepal Armed Border Force reached the spot and halted the works. The administration alerted the state government.

Bihar’s water resource minister Sanjay Kumar Jha confirmed the development on Monday. “This is the first time that Nepal has placed a barrier to stop movement of material, men and machinery from the Indian side,” Jha said, adding the Ministry of External Affairs has been being apprised of the situation.

“The Gandak Barrage has 36 gates, half of which fall on our side. Repair of these has been completed. However, when we tried to cross over to the other side to repair the remaining 18 gates, maintenance of which is carried out by us, we found the barricades,” Jha said.

Big worry,says minister
The embankment protects Dhaka and other areas of East Champaran from flood. Bihar’s water resource minister said if repair is not done on time, north Bihar would face a deluge. 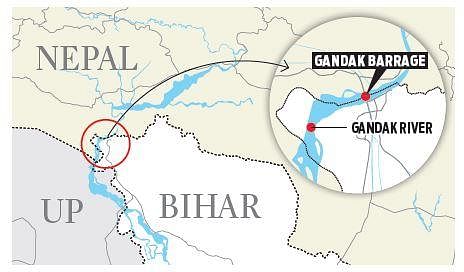 Stay up to date on all the latest Nation news with The New Indian Express App. Download now
TAGS
Bihar Nepal India