Rajsthan has been hitting headlines in the past few months for increasing cases of atrocities against Dalits.

JAIPUR: Rajasthan has been hitting headlines in the past few months for increasing cases of atrocities against Dalits. In a state with deeply feudal roots, Dalits have routinely been the targets of injustice and violence but the spate of incidents in recent weeks is alarming. - In Jalore, a Dalit youth was stripped, thrashed and his hair cut by a local Sarpanch and his goons on February 29 for an alleged affair with a girl in their village In Barmer, a 26-year-old Dalit youth Jitendra Khatik alias Jeetu died in police custody on February 29. The cops had taken him in allegedly to recover items stolen from a private company.

In Nagaur, a Dalit youth was brutally beaten, stripped and petrol was poured into his rectum with the help of screwdrivers by seven assaulters for allegedly a minor theft on February 19. Rising incidents have ignited a political storm. State BJP leaders demanded CM Ashok Gehlot’s resignation and tough action against the errant police officials. Amit Malviya, the national in-charge of the BJP IT cell, too had tweeted on the issue. However, the ruling Congress claims the BJP’s allegations are not true. ‘‘Numbers have gone up because our government has made it mandatory to report and file incidents. Under the BJP rule, many incidents went unnoticed and FIRs were not even registered. The situation in Rajasthan is much better than in BJP-ruled states such as UP, Bihar and Haryana,’’ said state Health Minister Raghu Sharma.

This argument is also echoed by the state police which said the increasing number of cases is due to better reporting. Beyond politics, the data presents a dismal picture. Currently, Rajasthan ranks fourth in terms of Dalit atrocities across India (see box). Although Dalits constitute over 17 per cent of Rajasthan’s population, the community has not been politically mobilised as well as in Uttar Pradesh, Bihar or Maharashtra. Rajasthan has been among the top five states when it comes to violence against Scheduled Castes. 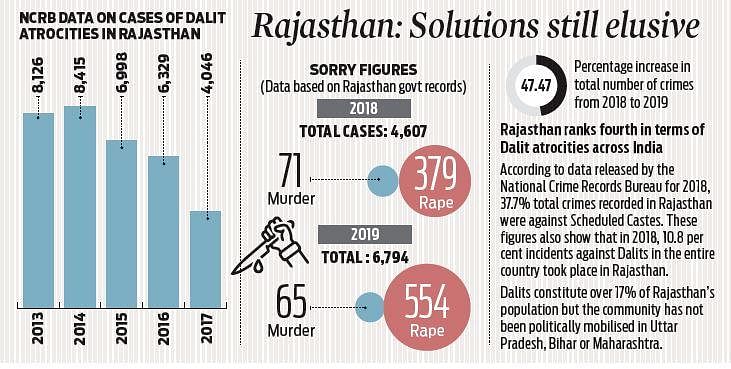 However, given the power dynamics between the Dalits and the powerful upper caste lobbies, atrocities against the Dalits have scarred the socio-political landscape of Rajasthan both during BJP and Congress rule. During 2013 to 2018, when the Vasundhara Raje-led BJP government was in power, there may have been fewer incidents against Dalits but there were many significant ones. The most notorious was in 2015 when armed men belonging to the politically influential Jat community attacked Dalit families in Dangawas village of Nagaur. The attack left six people dead and several injured.

The truth is that feudalism remains at the core of the socio-political reality of Rajasthan. P L Meemroth, the chief functionary of the Centre of Dalit Rights in Jaipur, said all governments in the state are just the same for the weaker sections. ‘‘Dalit atrocities have grown in recent times because the Dalit youth of today asserts themselves, which invites a counter-reaction. Also, the FIR registration has gone up in recent months which weren’t the case earlier,’’ he remarked.

Meemroth said the anti-Dalit mentality of the police and administrative machinery often encourages atrocities on Dalits. “The police are hardly aware of the human rights of all citizens. Unless police negligence is checked, it will be impossible to prevent atrocities against Dalits.’’Political analyst Rajeev Gupta argued that this apathy stems from the fact that in the politics of Rajasthan, there is no third force like the BSP in UP. He points out that in the 200-member Rajasthan Assembly there’s always been around 30-odd MLAs from SC/ST categories. “Whether its MLAs or MPs from the SC/ST sections, they have been unable to become the voice of the Dalits. Instead of seeking justice for weaker sections, they remain more focused in pleasing their party leaders and pursuing their individual agendas,” he said. Till the time this dismal socio-political environment persists in Rajasthan, the dream of equality and justice for Dalits in the state is likely to remain elusive.