Vows exemplary action against those involved in northeast Delhi violence

NEW DELHI: Blaming anti-CAA protesters for the recent communal riots, Union Home Minister Amit Shah on Thursday vowed exemplary action against those responsible for the violence. Shah reiterated on Thursday in the Rajya Sabha that the culprits of the communal violence will be punished irrespective of their religion, caste and political affiliation. He stated that it was the anti-CAA protesters which turned communal on February 24, when riots broke out in northeast Delhi. 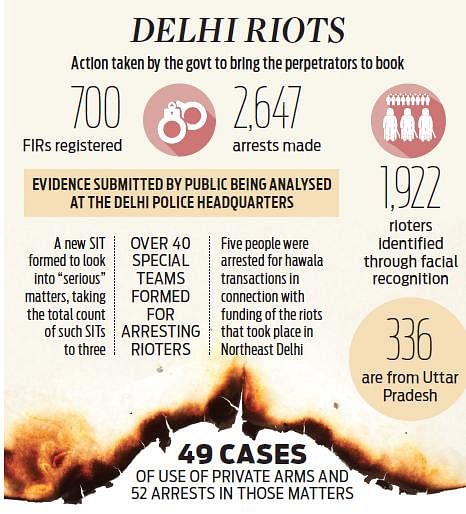 On the opposition’s questions about the role of hate speeches delivered by BJP members, Shah reiterated his Lok Sabha statement on Wednesday that speeches made by opposition leaders, including one from the  Congress, stoked the riots. But on Thursday, for the first time, Shah squarely laid the blame on communal riots on anti-CAA protestors. Many other BJP leaders, including its spokesperson Sudhanshu Trivedi, had also suggested the role of anti-CAA protesters in the recent riots.

“What was anti-CAA protests got converted into communal incidents on February 24 at many places,” Shah said, blaming the hate speeches of non-BJP leaders for the violence.  He added seven-eight new protests started on February 23 in Delhi to coincide with US President Donald Trump’s visit. The fact that the riots happened around US President Donald Trump’s visit suggested that there were other forces at play in instigating and planning the riots, he asserted.

Congress leader Anand Sharma argued that while investigating agencies should probe the role of every agency and person involved in the riots, everyone protesting against CAA could not be considered a rioter.  For the second consecutive day in Parliament, Shah lauded the Delhi police for its handling of riots and said the investigating teams had already arrested the suspected killers of Delhi Police head constable Ratan Lal and IB staffer Ankit Sharma. Defending the police, Shah said all the criticism of riots should be levelled at him but not at the police force of Delhi, “who were able to contain riots to just 12 police stations.” “Riots could have happened in other parts of the city also but it was because of the alertness of the police force that riots were brought under control in 36 hours and were prevented from spreading elsewhere.” Shah added that 336 people were identified to have arrived from UP to instigate riots.

The Lok Sabha will sit for long hours to discuss demands for grants of ministries. Lok Sabha Speaker Om Birla sought the nod of the House to meet over the weekend. Birla turned to Union Minister of State for Parliamentary Affairs Arjun Meghwal after listening to a loud “No” from the MPs. He then said the House would work till late hours on Thursday and Friday to discuss the demands for grants.