Wuhan in China’s Hubei province was the epicentre of the coronavirus outbreak. China enjoys observer status in the SAARC.

NEW DELHI: As leaders of SAARC countries met through video-conference on Sunday to tackle the corona threat, China found a mention in many leaders’ remarks.

Wuhan in China’s Hubei province was the epicentre of the coronavirus outbreak. China enjoys observer status in the South Asia Association for Regional Cooperation (SAARC). 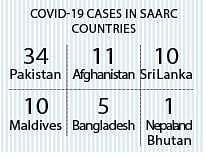 Special Assistant to the Pakistan PM on Health, Zafar Mirza, said SAARC countries should learn from China. “We must learn from and disseminate information from observer states like China, which have dealt with the virus since its outbreak in Wuhan,” he said.

Nepalese PM KP Sharma Oli also remarked that Chinese expertise to deal with the situation must be utilisied. Afghanistan President Ashraf Ghani said cooperation between SAARC and the Shanghai Cooperation Organisation, of which China is a member, should be increased to effectively deal with the pandemic.

Maldivian President Ibrahim Mohamed Solih said maximum tourists to the island nation come from China and lamented that the virus has led to a drastic fall in their numbers.

Pilgrimage to Gurudwara Kartarpur through the newly built corridor will remain suspended for an indefinite period from March 16. Pakistan had on Saturday banned its citizens from travelling to the shrine. Akal Takht Jathedar Harpreet Singh had earlier appealed to the Centre not to shut the corridor a travel ban on all international pilgrimages is imposed.

Now we are on Telegram too. Follow us for updates
TAGS
Pakistan Pakistan Coronavirus Nepal Nepal Coronavirus China China Coronavirus