The effective way to handle a crisis is to first admit there is one. That acknowledgement has come from none other than the Reserve Bank of India and this time, well in advance.

On Monday, the central bank at a hurriedly called press conference warned that Covid-19 could poke on our sore spot, which is the slowing economy, and throw everyone further off balance.

Global growth may see a 0.4-1.5 per cent erosion, but RBI governor Shaktikannta Das refused to quantify the actual impact on India. As it is, the Indian economy needs no fresh trouble having sunk to a six-year low of 4.7 per cent just last December.

We may be insulated from the global value chains, but in a globally integrated environment, some amount of economic hit is unavoidable, confirmed Das. “Second round of effects of the pandemic could operate through a slowdown in the domestic economic growth and it would obviously be a result of the synchronised slowdown in global growth and as a part of that, the growth momentum in India would also be impacted somewhat,” he said.

Sectors from tourism to trade are suffering a loss of activity, while spillover effects aren’t sparing any from overseas to domestic equity markets to forex and bond markets.

The current slowdown partly worsened due to the government’s rather belated admission of the abundant weakness in the economy, but Das defended that this time it’s different. Efforts were being mounted by the government on war-footing, as Covid-19 could impact India directly through trade channels, in which exposure to China is relatively high, he reasoned.

Precisely for such reasons, respective central banks, 20 so far, unleashed emergency interest rate cuts, but Das isn’t pressing into action. For now, ‘calibrated measures’ including the $2 billion dollar-rupee swaps and `1 lakh crore long-term repo operations in tranches are just what the system needs. 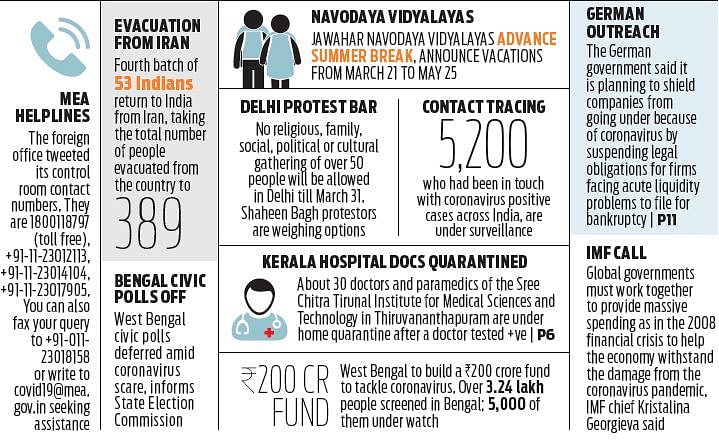 But against the recent US Fed’s 150 bps rate cut and the $1.5-trillion credit boost, RBI’s limited intervention and its decision to sit out in the ongoing global out-of-turn rate cut cycle, appears like a water pistol dousing a giant fire.

That said, a rate cut is not completely off the table. Perhaps, given the previous 135-bp rate cut has become the proverbial curate’s egg (only 69 bps transmitted to borrowers), timing is everything for Das’ next rate reduction.

“We are evaluating and we will announce it when we hold policy meeting. A decision on rate will be taken in MPC meeting, I’m not ruling out any possibility,” he said. The next Monetary Policy Committee review is on April 3.

Importers feel coronavirus heat Firms importing goods from China and other nations are likely to be hit after the government restricted cargo handling at ports. About 700 ships, both passenger and cargo, are reportedly stranded at various ports. Importers will have to bear the cost of delay

The Drugs Controller General of India has approved a protocol for restricted public health emergency use of drugs lopinavir and ritonavir to treat coronavirus. The protocol was written by doctors and scientists from National Institute of Epidemiology in Chennai, All India Institute of Medical Sciences and Indian Council of Medical Research, Delhi. These drugs, normally used for HIV treatment, were administered to five Covid-19 patients in Jaipur and Gurugram and they quickly recovered

Mahadesh Prasad, a scientist from Arkalgud in Hassan district in Karnataka is part of team of 10 research scientists of European Task Force formed by WHO to develop a vaccine to fight coronavirus. He is a scientist at the university of Leuven in Belgium

Due to coronavirus, most airlines in the world will be bankrupt by the end of May unless there is coordinated govt-industry action, says global aviation consultancy firm CAPA

Stay up to date on all the latest Nation news with The New Indian Express App. Download now
TAGS
RBI Reserve Bank of India Coronavirus COVID 19