NEW DELHI: On a day coronavirus claimed third life in India, the Centre released detailed guidelines for  dead body management including precautions, infection prevention and control measures, handling of the body and environmental disinfection and strategies for clinical management of COVID-19 triage.

The clinical management plan included early recognition of patients and guidelines for implementation of infection prevention and control measures for healthcare workers. These guidelines come a day after the Centre urged states to adopt major social distancing exercise that included shutting down of all educational institutions, theatres, museums, monuments and encouraging private sector employees to work from home.

The Centre also said that the total number of confirmed cases have now reached 137, of which 14 have been cured, 3 have died while 120 are active cases. The total cases in in the country include 24 foreign nationals.The government also said that guidelines have been issued for private sector laboratories intending to test for COVID 19 which say that laboratory test should be only offered when prescribed by a qualified physician as per Indian Council for Medical Research guidance for testing.

Since the guidance evolves periodically, the latest revised version should be followed, and the ICMR will share the standard operating procedures for laboratory testing and provide positive controls for establishing the test as soon as the concerned private laboratory has procured the primers, probes and reagents as per SOPs.

Adoption of commercial kits for testing should be based on validations conducted by lCMR-National institute of Virology, Pune, the health ministry said. In a meeting to review the status and preparedness related to the outbreak, Cabinet Secretary Rajiv Gauba stressed the implementation of social distancing measures as listed by the  ministry on Monday. The government is hoping that social distancing would have a major impact in limiting the spread of the disease.

In order to ensure effective and seamless coordination between the Centre and the states, 30 nodal officers of the level of joint secretary and above have been drawn from various ministries to liaison, coordinate and help the states. They will be deputed to the states, and are expected to work in close coordination with the state authorities for coordinating the preparedness and response. An orientation meeting of all the officers is planned Wednesday.

No clarity yet on +ve Indians in Iran
The External Affairs Ministry on Tuesday said it had no confir-mation whether 250 Indians in Iran had tested positive for COVID-19 but acknowledged that it’s aware of such a list of people being circulated. MEA Additional Secretary Dammu Ravi said there was a possibility of Indian pilgrims getting infected given the extensive spread of virus in Iran. 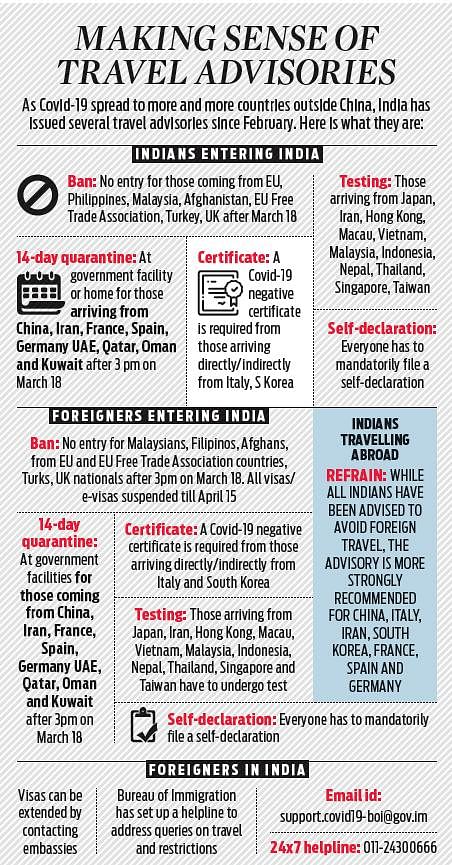