NEW DELHI/BHOPAL: The  Supreme Court on Thursday directed Madhya Pradesh Assembly Speaker NP Prajapati to convene a special session on Friday and conduct the floor test.   Till late Thursday night, however, the Vidhan Sabha had not come out with Friday’s business agenda.

Hours after the SC order, Assembly Speaker Narmada Prasad Prajapati accepted the resignations of remaining 16 rebel Congress MLAs who have been in Bengaluru since March 9. This reduces the House’s total strength to 206, where ruling Congress, with 92 members and seven allied MLAs, is now at least five short of the simple majority figure of 104 seats. The BJP, with 107 MLAs, has three more than the majority mark. The resignation of six ministers, all Jyotiraditya Scindia loyalists, were accepted earlier. 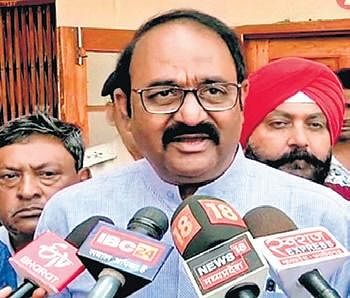 Amid speculations of either Nath resigning ahead of the floor test or the Congress challenging the SC directive before a larger bench, the CM announced to convene a press conference at 12 noon on Friday.While ordering the floor test, the SC bench of Justices D Y Chandrachud and Hemant Gupta also ordered video recording and possible live streaming of the House proceedings when the Kamal Nath-led Congress government undertakes the floor test.

The bench directed the DGPs of MP and Karnataka to provide security to the 16 rebel Congress MLAs, if they appear in the Assembly for the trust vote. It ordered that the House will have a single point agenda of the floor test and no hindrance is to be created for anyone and asked the Assembly secretary to ensure that there is no breach of law and order. Earlier, the top court suggested that the Speaker interact with the rebel MLAs through video link or it can appoint an observer. However, Prajapati refused to accept the proposal.