CHANDIGARH: Farmers and poultry rearers in Punjab and Haryana are staring at big losses as both demand and supply are hit during the ongoing 21-day lockdown. “Peas, tomato, cabbage, cauliflower, green onions, coriander and kaddu are lying in the fields and have not been picked. Farmers are incurring losses,” said Puneet Singh Thind, national director of Vegetable Growers Association of India. “Capsicum growers will also be hit.” The production of potato, a major staple in Indian households, is likely to be hit too.Mandis are at a standstill as labourers are unavailable while wholesalers face problems in supplying crops to retailers and government agencies, he said. Adding that the supply chain is blocked. 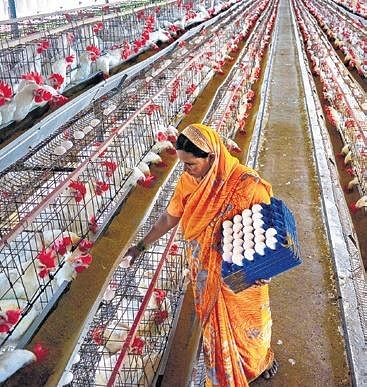 “All crops will be gone in a few days... The district administration allowing retail operations will support only a fraction (of farmers) and a major portion of produce will be lost.’’What adds to the misery of the farmers is that many have taken land on lease and rents are higher than conventional crops. “The administration should register and inspect such plots. The farmers should be compensated from Covid relief fund.’’

Another looming fear is that not only the winter crop but even the next cycle of vegetables produced — April-August cycle — would also be affected if this situation persist, said Malkeet and Arshdeep Singh, director, Northern Farmers Association .For poultry rearers, the crisis is a shortage of bird feed. Rough estimates suggest that 10 to 20 lakh chicks are hatched in Haryana daily while the daily egg production could be anywhere between 5 and 7 crores in the two states. Borders with Rajasthan are sealed while trucks loaded with feed from a leading factory in Safidon are unable to move. Progressive Poultry Farmers Association, Punjab president, Mohinder Arora conceded that suppliers in Rajasthan, Madhya Pradesh, Uttar Pradesh and Gujarat could not send feed to poultry farmers.

Now we are on Telegram too. Follow us for updates
TAGS
Coronavirus COVID-19 Punjab Haryana