Amid the continuous spike in confirmed cases, the metropolitan city of Maharashtra has the recovery rate of only 19.1, much below the country average which is currently more than 39 per cent.

NEW DELHI: Top ten cities having nearly 50 per cent of the total confirmed COVID-19 cases comprise three from Maharashtra, two from Gujarat, and one each from Rajasthan, West Bengal, Madhya Pradesh and Tamil Nadu and New Delhi.

Mumbai appears to be in difficult position so far as different parameters including number of confirmed cases and recovery rate are concerned.

Amid the continuous spike in confirmed cases, the metropolitan city of Maharashtra has the recovery rate of only 19.1, much below the country average which is currently more than 39 per cent.

Mumbai has the highest number of cases nearing 22,800 out of which 4,352 have recovered as on Tuesday afternoon and 800 have died.

Chennai has got as many as 7,677 cases. There are two cities from Gujarat, Ahmedabad and Surat in top ten having 8,945 and 1,156 confirmed cases.

Delhi comes at the second position among the top cities with over 10,000 cases, however, the national capital has recorded fairly higher rate of recovery at 50.4 per cent which is much higher than the national average. Delhi government has time and again claimed of having adequate medical facilities to deal with large number of positive cases.

Kolkata has relatively lower number of cases at 1,433. Indore in Madhya Pradesh has 2,715 confirmed cases out of which 1,158 have recovered. 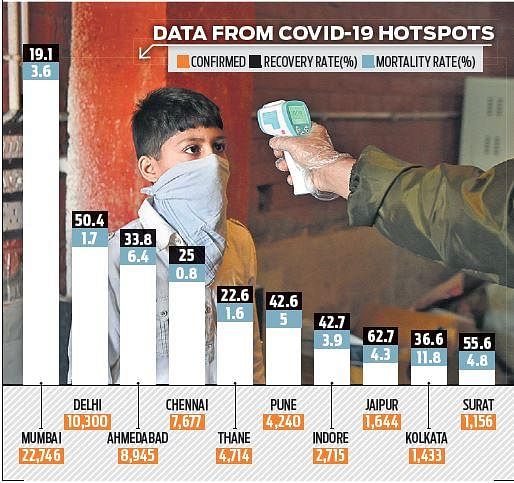 Stay up to date on all the latest Nation news with The New Indian Express App. Download now
TAGS
coronavirus COVID 19 coronavirus lockdown