While there was some speculation about service providers charging exorbitant fares, the ministry is yet to officially announce the resumption of the ticket booking process from May 25.

NEW DELHI: People planning to take domestic flights from May 25 need not fret about abnormally high fares and the possibility of quarantine at the destination, as the Centre has capped the cost and decided to ease quarantine norms.

While there was some speculation about service providers charging exorbitant fares, the ministry is yet to officially announce the resumption of the ticket booking process from May 25.

Announcing its price band computed on the basis of the flight duration, the aviation ministry said it has studied equivalent rail fares on the routes while capping airfares. For example, on the Delhi-Mumbai sector where the journey time is 90-120 minutes, the minimum and maximum fares will be Rs 3,500 and Rs 10,000, respectively.

In all, there will be seven sectors (see box). Aviation Minister Hardeep Puri said airlines will have to sell at least 40% seats at the mid-point between the lowest and the highest fare.

To start with, services will begin on all routes with one-third capacity. For example, for operations from metros like Delhi, Mumbai, Chennai, Bengaluru, Kolkata and Hyderabad to metro cities, 1/3rd capacity of the summer schedule has been approved.

For metro to non-metro operations and vice-versa, where weekly departures are greater than 100, the government allowed one-third of approved schedule capacity.

But if the weekly departures are less than 100, airlines are free to operate any routes that work up to 1/3rd of the approved capacity.

According to an estimate, the country had an average daily operation of over 7,000 flights before lockdown.

When flying resumes from May 25, initially about 2,300 flights are expected to operate.
Speaking on the quarantine issue, the minister said, “The quarantine issue will be dealt with in a pragmatic manner. For instance, if I go to Kerala, then I will have to be in quarantine for 14 days. When I come back, will I be sent to quarantine again for 14 days? This is not practical.”

However, the Assam government insisted on subjecting all arrivals to quarantine.

Puri also said that under the revised standard operating procedures (SOPs), symptomatic passengers will not be allowed to travel at all. 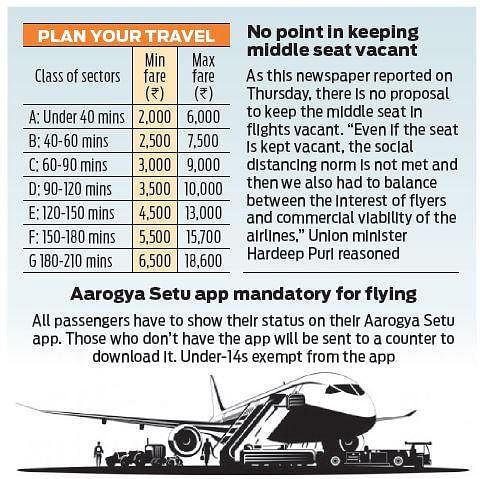