India’s hunger level is serious with a score of 27.2, according to the report jointly released by Welthungerhilfe and Concern Worldwide.

NEW DELHI:  India’s rank in this year’s Global Hunger Index rose to 94 among 107 countries from 102 last year but it has performed worse than its neighbours Bangladesh, Nepal and Pakistan.

The index, which calculates the hunger levels and malnutrition across the world, was released on Friday. While Nepal and Bangladesh ranked 73 and 75 respectively, Pakistan ranked 88.

India’s hunger level is serious with a score of 27.2, according to the report jointly released by Welthungerhilfe and Concern Worldwide.

Activists working on the area of food security called the report indicative of the ground realities and said the government has failed to address the existing scale of hunger in the country.

The report assessed the condition for 132 countries but released the data for 107 countries. The Covid-19 pandemic has undermined food and nutrition security for many, and its effects will likely ripple into the future, said the report. The existing report is not reflective of the impact of Covid-19 on hunger and malnutrition, it added. 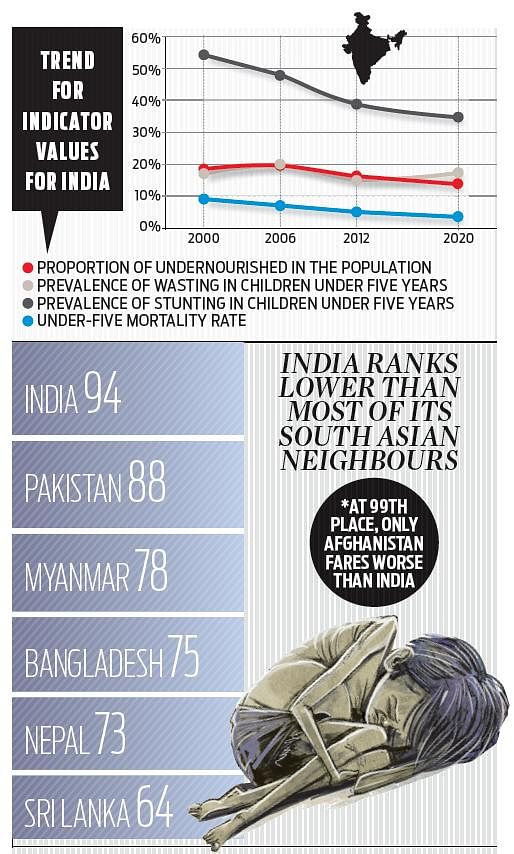 With the GHI score being calculated using a three-step process, the indicators used are the percentage of the population that is undernourished, percentage of children under five years who suffer from wasting, stunting, and child mortality.

Sachin Kumar Jain, a representative of Right to Food Campaign, said the government has failed to address the scale of the problem of malnutrition in the country.

“The prevalent development framework is disconnected from the issue of food security. The government should adopt an honest approach to the issue of malnutrition and hunger in order to tackle the problem. The index shows we have taken a wrong route for development,” said Jain.

Among 11 countries, where the public health significance of child wasting rate was considered ‘high’ or ‘very high’, India was in the very high category at 17.3 per cent.

Arvind Singh, advisor, health and nutrition at NGO Matri Sudha, said: “The cycle of malnutrition becomes irreversible by the age of 2 years. Malnutrition in this age group is largely the result of inappropriate care, inadequate nutrition, and lack of access to healthcare services during pregnancy. We need to develop a framework starting from pre-pregnancy till two years of a baby’s birth with a major focus on home-based care to fight this.”

While there was a decline in under-five mortality, which were driven by the decrease in deaths from birth asphyxia or trauma, neonatal infections, pneumonia, and diarrhoea, child mortality caused by prematurity and low birthweight increased, particularly in poorer states, the report stated by quoting a study.

“Data from 1991 to 2014 for Bangladesh, India, Nepal, and Pakistan showed that stunting is concentrated among children from households facing multiple forms of deprivation, including poor dietary diversity, low levels of maternal education, and household poverty,” said the report.

Now we are on Telegram too. Follow us for updates
TAGS
Hunger Index Global Hunger Index Right to Food Campaign