In a significant verdict on February 13, 2020, the Supreme Court had ruled that all political parties must publish the entire criminal history of candidates along with the reasons for fielding them.

NEW DELHI/PATNA: Siddharth Saurav is the Congress candidate from the Bikram seat in the ongoing Bihar elections. He has at least one criminal case against him and his election affidavit says among the charges he faces are of murder filed under Section 302 of the IPC.

Raj Kumar Sah, the Lok Janshakti Party’s candidate from the Lalganj seat, has an attempt to murder case against him filed under Section 307 of the IPC.

Both the Congress and the LJP should have, as directed by the Election Commission, published their criminal antecedents in newspapers, social media platforms and their party’s websites. But neither party has done so, at least until late on Monday night.

The Congress and the LJP are not the only parties that have not complied with the EC’s directive to publicise details of the candidates with a criminal history.

Former Union minister Upendra Kushwaha’s party, the Rashtriya Lok Samata Party, is among the prominent parties that is yet to comply with the order.

Chief Minister Nitish Kumar’s Janata Dal (United) uploaded details of the criminal cases of its candidates late on Sunday night, which was past the deadline for complying with the EC’s order.

In a significant verdict on February 13, 2020, the Supreme Court had ruled that all political parties must publish the entire criminal history of candidates along with the reasons for fielding them.

“It shall be mandatory for political parties to upload on their website detailed information regarding individuals with pending criminal cases, including the nature of the offences and relevant particulars,” the court ruled. 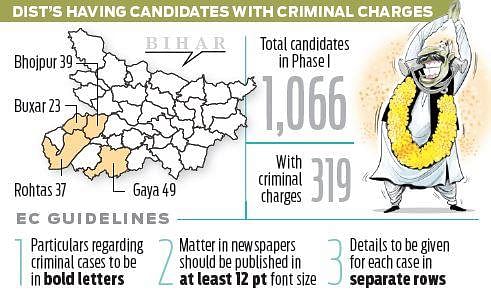 Following the apex court verdict, the EC, in an order passed on September 16, 2020, said that “details regarding criminal cases are to be published on three occasions during the campaign period.”

The first round of publicity has to be done “within first 4 days of withdrawal” of nomination papers.

The second and third times the parties have to publish details of criminal candidates are “between (the) next 5th-8th days and once between (the) 9th day till the last day of campaign,” the EC said.

For the first phase of polling on October 28, the first round of publicity should have been done by all political parties by October 16 as the last date of withdrawal of candidates was October 12.

But except for the Rashtriya Janata Dal and the BJP, most other prominent parties have not uploaded the details of their criminal candidates.

“This is gross contempt of the order of the Supreme Court as well as the Election Commission of India, which is the implementing agency,” said former chief election commissioner S. Y. Quraishi, adding that “parties were willfully disobeying the Supreme Court judgment.”

SC advocate K V Dhananjay said “any voter of a constituency can challenge the victory of a successful candidate on the ground that he blatantly violated the order passed by the Supreme Court.” He said he had already drafted a petition for anyone wanting to challenge the election of criminal candidates.

When contacted, the Congress and LJP spokespersons Madan Mohan Jha and Ashraf Ansari respectively refused to comment while JD-U spokesman Ajay Alok said “there is no candidate with any criminal history. Tickets were denied to them.”

An EC official said the commission cannot take suo moto action against any of the political parties for their alleged contempt of court and violation.

“Only if someone files a complaint can we take cognisance of the matter,” he said.

Quraishi blamed the weak electoral laws for this.

“The whole problem is with our electoral laws, they cannot deal with violation of these sorts. The commission can at best pull up the political parties for the gross violation but can’t bar them from elections or disqualify their elections.”

Of the 1,066 candidates in the fray for the first phase, 319 have criminal cases.

The RJD has fielded the maximum with a criminal history, 29. It is followed by the BJP and the Lok Janshakti Party (LJP) with 21 each, Rashtriya Lok Samta Party (RLSP) 17 and the Janata Dal (United) JD(U) 14.