BHOPAL: Two days before campaigning ends for the November 3 Assembly bypolls in Madhya Pradesh, the Election Commission cracked the whip on former chief minister and state Congress president Kamal Nath for repeatedly violating the Model Code of Conduct and revoked his ‘star campaigner’ status with immediate effect on Friday.

The poll panel’s three-page order said Kamal Nath is “breaching the ethical and dignified behaviour” and his status of leader of political party (star campaigner) was being revoked for repeated MCC violations and for completely disregarding the advisory issued to him. 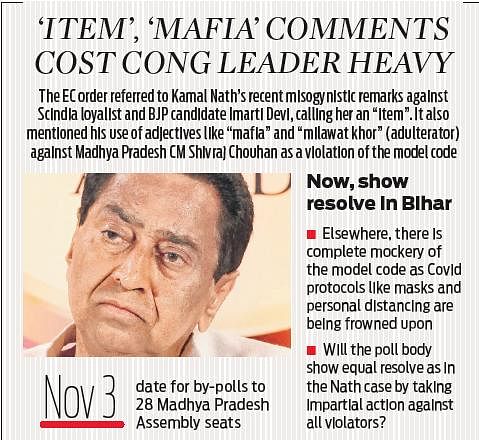 If any campaign is done by Nath from now onwards, the entire expenditure related to his travel, stay, visit etc. shall be borne by the candidate concerned, the order stated. Reacting to the order, Nath tweeted, “Now the people will decide. It’s an attempt to crush my and Congress’s voice.

ruth cannot be defeated, the people will side with the truth.”  The Congress veteran had kicked up a storm when he had used the word “item” to refer to the state’s WCD minister Imarti Devi at a poll rally on October 18. She was among the 22 MLAs who had resigned in March, bringing down the Nath-led Congress government, and had subsequently joined the BJP. She is now seeking re-election on a BJP ticket from Dabra reserved seat.

The BJP had approached the EC against Nath’s remark, accusing him of insulting women and the SC community. The poll panel had issued a notice to him for MCC violation and had advised him to refrain from using objectionable words.

Recently, the BJP filed another complaint against Nath for referring to CM Shivraj Singh Chouhan as “mafia”, “milawat khor” and “nautanki ke kalakar” who should try his luck in Mumbai. The EC had sought a report from MP’s Chief Electoral Officer, who had confirmed MCC violation by the Congress leader.

Asked about the BJP’s demand that he should seek apology, Nath said, “It is not anyone’s demand. In the end I do what I feel is right and proper, because it (disrespecting the woman minister) was not my intention.”