Filing the charge sheet in a Special NIA Court in Delhi, the agency named a Kashmiri couple — Jahanzaib Sami, 36, and Hina Bashir Beigh, 39.

NEW DELHI:  The National Investigation Agency on Wednesday filed a charge sheet against five alleged operatives of the Islamic State Khorasan Province (ISKP) who, the agency said, utilised the anti-CAA protests to instigate Muslims against the Indian government. 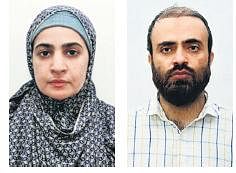 The agency also said the accused were planning to carry out “mass-killings in crowded places” to further the activities of ISIS in India.

Filing the charge sheet in a Special NIA Court in Delhi, the agency named a Kashmiri couple — Jahanzaib Sami, 36, and Hina Bashir Beigh, 39.

Three others who were chargesheeted are Hyderabad-based Abdullah Basith and Pune-based Sadiya Anwar Shaikh, 20, and Nabeel Siddick Khatri, 27.

According to NIA, the accused conspired  “to utilise the anti-CAA protests to instigate Muslims against the Indian government by coining seditious slogans and making graffiti at public places and highlighting the same on social and international media”Jahanzaib, Hina Bashir, Abdullah Basith and Sadiya were also provoking some gullible youth to participate in anti-CAA protests actively.

In case these protests failed to provoke the Muslims, they were planning for arsoning of government buildings and public property so that riots could happen and they could exploit the sentiments of Muslims, the agency said.

The couple, along with others, had also conducted reconnaissance at prominent places in Maharashtra, the NIA claimed.

Now we are on Telegram too. Follow us for updates
TAGS
Islamic State Khorasan Province National Investigation Agency anti-CAA protests