Sitting on Rs 781 crore in MGNREGS wages during COVID

The pendency comes at a time when the scheme has seen record rise in demand for work owing to the lockdown.

NEW DELHI:  While the rural employment scheme extended a lifeline to millions of migrant workers who were forced to return to their villages from cities during the Covid-19 lockdown, its implementation has been hampered by unpaid wages to the tune of Rs 780 crore. 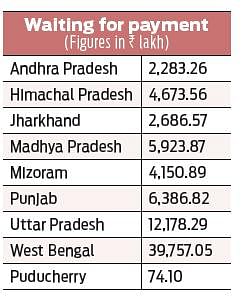 According to data from the rural development ministry, Rs 781.14 crore worth of fund transfer orders (FTOs) for payment of wages under the Mahatma Gandhi National Rural Employment Guarantee Scheme (MGNREGS) are pending in States and Union territories.

The Centre said fund release is a continuous process. “Wage payment is made on regular basis. Under DBT (direct benefit transfer), wage payment is made directly to the bank/post office account of the beneficiary by the Centre after receiving the FTO from States. The aim is to clear pendency on daily basis,” the government said in response to a question on pendency of wages under MGNREGS.

According to officials, the Centre usually transfers funds to state governments, who in turn release the funds to districts. The Centre does not release funds directly to districts. Experts say if the government wants to get the economy on track, it must clear pending wages at the earliest.

“The scheme is the country’s best bet in reviving the economy. It is important that the government handles the scheme properly and does not let pendency of wages affect its implementation,” an expert on rural development and a former professor at IIM-A said.

Now we are on Telegram too. Follow us for updates
TAGS
COVID COVID 19 Coronavirus