Unease on farm Bills, but Chautalas not to ditch BJP like Badals

A few days ago, farmers in Pipli were cane-charged, drawing condemnation from Digvijay Chautala, the younger brother of Dushyant. The JJP leader too had flayed the police action.

CHANDIGARH: The BJP-Jannayak Janata Party coalition government in Haryana appears under no threat as of now following passage of three agriculture reforms Bills in Parliament. Sources in JJP say the farmers-based party is likely to pacify the agitating farmers. 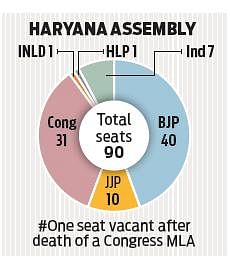 After the Shiromani Akali Dal withdrew Harsimrat Kaur Badal from the Union cabinet in protest against the Bills, it was speculated that pressure was building on Dushyant Chautala-led JJP to take a similar step. On Sunday, JJP MLAs Jogi Ram Sihag and Ram Karan Kala had joined the farmers’ road blockade. A few days ago, farmers in Pipli were cane-charged, drawing condemnation from Digvijay Chautala, the younger brother of Dushyant. The JJP leader too had flayed the police action.

Commenting on the coalition government, political analyst Prof Raghuvendra Tanwar of Kurukshetra University said that JJP would not break the alliance with the BJP as these farm Bills are “aimed at genuinely helping the farmers”. “The Chautalas are grassroots leaders with a strong rural network. They cannot afford to take a wrong decision.” “The JJP leadership would be able to pacify the farmers.

It might take some time. The protests are taking place only in two states, Punjab and Haryana,’’ Tanwar said. While thanking the Centre for increasing the MSP of rabi crops, Deputy CM Dushyant Chautala said on Tuesday that the measure has “proved that the opposition claims of farm bills being a threat to the MSP were lies”. “We are trying to remove the doubts of farmers about the MSP,’’ he said.

He said that Food Corporation of India and other state agencies would continue to purchase the crops as before. He referred to PM Modi’s statement that the system of mandis will remain intact. It is learnt that there is a lot of pressure on the government to meet the farmers’ associations and agree to their demands. Gurnam Singh Chaduni, president of the state Bhartiya Kisan Union, has said that the elected representatives should not turn a blind eye to the agitation.

Now we are on Telegram too. Follow us for updates
TAGS
haryana government Jannayak Janata Party Dushyant Chautala farm bills