The Congress on Thursday launched a nearly two-month-long mass movement against the government for passing the farm bills.

NEW DELHI:  Taking their fight to the streets after the showdown in Parliament, Opposition parties will on Friday support a call for Bharat Bandh given by over two-dozen affiliated farmer organisations over the recent passage of three farm sector reforms bills by voice vote. 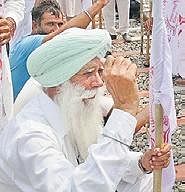 While Punjab has already seen disruptions in train services due to massive protests, a clutch of organisations like the All India Farmers Union, Bharatiya Kisan Union, All India Kisan Mahasangh, and All India Kisan Sangharsh Coordination Committee have announced a nationwide bandh on Friday.
Farmers’ outfits in Karnataka, Tamil Nadu and Maharashtra, too, are on the same page. Also, 10 Central trade unions will support Bharat Bandh.

The Congress on Thursday launched a nearly two-month-long mass movement against the government for passing the farm bills. It intends to collect two crore signatures from protesting farmers against the proposed laws that are awaiting Presidential assent. “The nationwide agitation will continue till the government repeals the black laws,” A K Antony had said after a meeting of the party general secretaries on Monday. Apart from joining the Bharat Bandh, the Congress has lined up a series of pro-farmer programmes, said K C Venugopal, party general secretary.

In poll-bound Bihar, RJD, Congress and Left parties will together take to the streets and stage protests. In West Bengal, Chief Minister  and Trinamool Congress  head Mamata Banerjee said they will protest against the farm bills until they are withdrawn.

As for Tamil Nadu, the DMK and its allies have announced protests across the state from September 28. While Chief Minister and AIADMK chief Edappadi K Palaniswami is solidly backing the new farm reform measures, DMK chief M K Stalin claimed the bills would push poor farmers to penury. Apart from Congress, Trinamool, AAP, TRS, BJD and Left parties have demanded that the bills be sent to a select committee for vetting.

14 train pairs suspended
With the three-day Rail Roko protest in Punjab by farmer outfits starting on Thursday, 14 pairs of trains have been suspended. A state bandh call for Friday has already been made

Now we are on Telegram too. Follow us for updates
TAGS
Bharat Bandh farm bills