All those without symptoms who test negative using the RAT but later develop symptoms should also be retested using RTPCR, as per the central advisory issued earlier this month.

NEW DELHI: Most of the states with the highest Covid-19 case burden are not adhering to the retesting rules laid down by the ICMR for a large number of symptomatic patients, information accessed by this newspaper has confirmed. As per the ICMR guidelines, all symptomatic people who are first tested using the less reliable rapid antigen tests, in case they test negative, have to get tested again using RTPCR, considered the gold standard for diagnosing Covid-19.

All those without symptoms who test negative using the RAT but later develop symptoms should also be retested using RTPCR, as per the central advisory issued earlier this month. The data maintained by the Centre, however, reveals that six of the seven high-burden states that account for about 63% of the total active cases in India and 77% of over 92,000 deaths barely stick to the norms.

Punjab, for example, retests only 7% of the symptomatic people, followed by Maharashtra (8%), the Union Ministry of Health and Family Welfare figures for the last one week reveals (see box). This figure is only a tad better in case of Delhi and Andhra Pradesh, both 12% while Tamil Nadu uses only RTPCR for all Covid-19 testing. 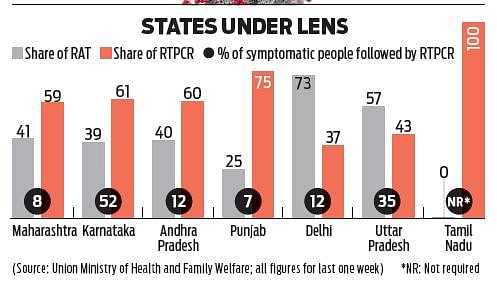 The retesting figures clearly suggest that a large number of SARS CoV-2 carriers are not being effectively identified, isolated and treated, leading to alarming trends of persistent rise in cases as well as deaths. “Some of these states are a major cause of concern for us because of their non-adherence to the testing norms and we are trying to constantly guide them on this,” said a senior health ministry official.

Another official said excessive reliance on RAT has also been flagged to the states on several occasions.
Experts say while RAT is the faster, cheaper and more convenient testing option, it has way lower sensitivity than RTPCR. This means that RATs give too many false negative results and it has been reported that they miss nearly 50% of the actual positive cases. RTPCR tests, on the other hand, detect about 70-90% of the cases.

A senior member of the National Covid-19 Task Force said, “It seems many states are only interested in showing a high number of tests everyday which they are achieving though RAT, but they are forgetting that it will neither help in controlling the pandemic nor prevent loss of lives. Many patients who miss being diagnosed, for example, can progress to have serious disease in a few days and also may keep spreading it to others.”

Daily testing nears 15 lakh mark
New Delhi: India has reached a landmark of sorts by carrying out nearly 15 lakh Covid-19 tests within a day on Thursday. “With 14,92,409 tests conducted in the last 24 hours, the cumulative tests have touched nearly 7 crore (6,89,28,440),’’ said Union Health Ministry on Friday. The government, however, did not make public how many of these 14.92 lakh tests were RTPCR tests and how many were less RAT. As 86,052 fresh cases were detected within a 24-hour period, the high number of tests brought down the test positivity rate to below 6% for the country for the first time in over three months. Tests per million stand at 49,948 as of now.