NEW DELHI:  Amid dire scarcity of medical oxygen for Covid patients, the Centre on Sunday banned the supply of oxygen for industrial purposes except in nine specified industries. The decision was taken based on the recommendations of the Empowered Group-II, Union Home Secretary Ajay Bhalla said, adding it will come into effect from Thursday.

Parallelly, the Railways decided to roll out an Oxygen Express to ease transport bottlenecks (see graphic). Delhi is staring at an unprecedented health crisis as it has less than 100 ICU beds vacant in its hospitals, Chief Minister Arvind Kejriwal revealed.

On a day when over 25,000 people tested positive for Covid, Kejriwal said: “I spoke to Home Minister Amit Shah today and informed him of our dire need of beds and oxygen. We are constantly in touch with the Centre and getting help from it.” Also, the case positivity rate jumped from 24% to 30% in just 24 hours, he informed.

He wrote to Prime Minister Narendra Modi requesting him to increase the number of beds reserved for Covid patients in Central government hospitals from 1,800 to 7,000. Delhi also sought uninterrupted supply of oxygen, which has reached a critical stage. 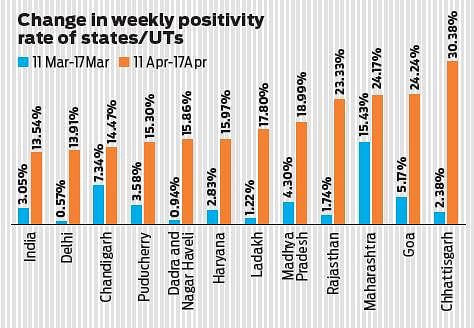 In Gujarat, Deputy Chief Minister Nitin Patel was candid in admitting that the present requirement of Covid beds and other healthcare facilities is more than the state administration’s capacity. In Madhya Pradesh, six critical Covid patients died at the Government Medical College Hospital ICU at Shahdol allegedly due to low oxygen pressure. The hospital though attributed it to co-morbidities. Social media sites were flooded with requests for help in arranging beds and oxygen.