The agency has registered a case against the two firms under section 120(B) of the IPC and sections 66B, 85, 43(a) r/w 66 of IT Act 2000. According to sources, following a preliminary enquiry based on a complaint filed by the Ministry of Electronics and Information technology, it was revealed that the founder and director of Cambridge Analytica had allegedly created an app ‘thisisyourdigitallife’ which was authorised to collect specific data of its users in Facebook as per their platform policy. 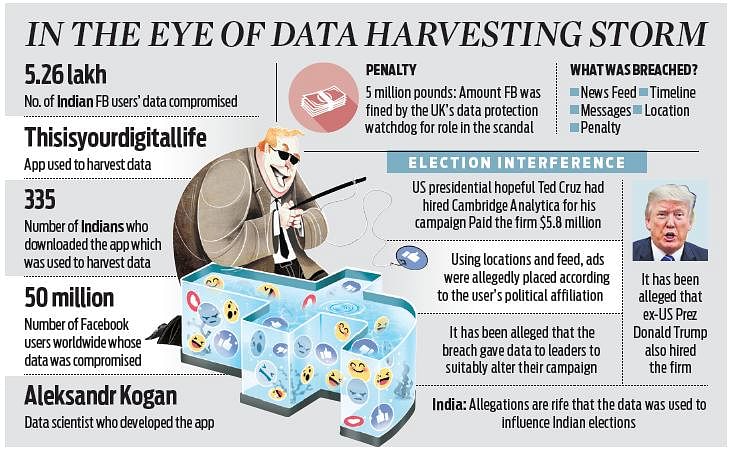 The app has also been accused of illegally harvested additional data of Facebook users and that of their friends. According to the agency, a total of 335 Indians had installed the app and data of approximately 5.62 lakh Facebook friends of these users was unauthorisedly harvested by the app without their consent.
According to the FIR, Cambridge Analytica entered into a conspiracy with the second UK-based firm in 2014 and gave the right to use this illegally harvested data to the second firm for commercial purpose.

In March 2018, many international media platforms accused former Cambridge Analytica employees, associates and documents to report that the firm had harvested private information from the Facebook profiles of over 50 million users across the world without their permission. In July 2018, IT Minister Ravi Shankar Prasad had told Parliament that a CBI probe will be conducted in the case. Allegations have also been levelled that GSRL used the data to allegedly influence elections in India.

Now we are on Telegram too. Follow us for updates
TAGS
Global Science Research Cambridge Analytica Illegal Data Harvesting CBI