It is learnt that the decision was deferred following Nana Patole’s demand that he be made a minister in the Maha Vikas Aghadi government.

MUMBAI: The Congress has put on hold announcing the name of the next president of its Maharashtra unit. It was more or less confirmed that the post would go to Maharashtra state assembly speaker Nana Patole (in pic).

But it is learnt that the decision was deferred following Patole’s demand that he be made a minister in the Maha Vikas Aghadi government. 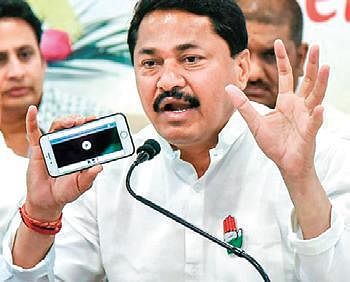 The central leadership of Congress had decided to replace incumbent Maharashtra Congress president Balasaheb Thorat with Patole, considering that he could devote more time and energy in expanding the party base. It was said in certain quarters that since Thorat is the Legislative Party leader in the assembly, revenue minister and state party president, he was unable to do justice to his role in the state unit. With the NCP and Shiv Sena aggressively expanding their reach, the Congress leadership felt they were falling behind.

According to Congress sources, Patole’s promotion to the president’s post was finalised and the file was also signed by Congress president Sonia Gandhi. “But Patole demanded that along with the Maharashtra Congress president’s responsibility, he should be also made the minister of energy or public works department.

However, this demand has surprised the Congress president and she refused to give him the go ahead. That has resulted in a delay in announcing the new president,” said a well-placed source requesting anonymity.

Another source said that the party high command wanted the new state president to concentrate solely on that role. “The centre leadership wanted someone who wouldn’t have other responsibilities and focus fully on party work. But Patole suddenly added another demand that surprised the high command, which decided against taking a decision right now.”Maharashtra Congress observer HK Patil was assigned the task for finding the new president. He held one-on-one talks with all Congress MLAs to understand their viewpoints. Patil and Patole were not available for comment.

Now we are on Telegram too. Follow us for updates
TAGS
Maharashtra Maharashtra congress