The nearly 150-year-old practice of biannual Durbar Move in Jammu and Kashmir has come to an end.

SRINAGAR:  The nearly 150-year-old practice of biannual Durbar Move in Jammu and Kashmir has come to an end. The J&K administration on Wednesday ordered cancellation of residential accommodations of Durbar Move employees officers from Srinagar stationed at Jammu and those from Jammu stationed at Srinagar — and directed them to vacate the government quarters within three weeks.

The order comes after Lt-Governor Manoj Sinha on June 20 said the administration had completely transitioned to e-office. “Now, both Jammu and Srinagar secretariats can function normally for twelve months,” Sinha said. The move will save the government `200 crore every year which will be used for the welfare of the deprived sections, he added. 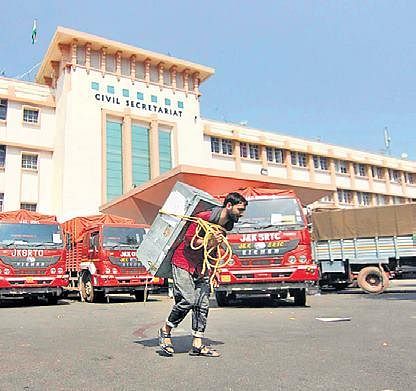 Over 10,000 government employees and thousands of official files and equipment used to be shifted in trucks and buses twice every year as Civil Secretariat and government offices moved from Srinagar to Jammu in winters and back to the summer capital after six months.

From May to October, government offices used to function from Srinagar and while winter capital Jammu remained the seat of administration for the other six months.  An employee associated with Durbar Move was annually paid an additional Rs 74,000 - Rs 50,000 as Move Travel Allowance and Rs 24,000 as Temporary Movement Allowance.

The estates department has 4,678 dwelling units, comprising 3,200 units in Jammu and 1,478 units in Srinagar. Many employees have private accommodation provided by the government. Officers and officials have to vacate their government-allotted residential accommodation within 21 days.

The practice of Darbar Move was started in 1872 by then Dogra ruler Maharaja Gulab Singh to escape the extreme weather conditions of Kashmir in winter and Jammu in summer. It not only put a burden on the State exchequer but also left people of the two regions at the mercy of the district administration and divisional commissioner.

Over the years, there have been calls to abandon the Durbar Move. In 1987, then J&K Chief Minister Farooq Abdullah had briefly stopped the practice, but had to withdraw his order after a hue and cry in Jammu and pressure from the Central government.

Tradition since 1872, with brief break in 1987
The practice dates back to 1872, when the capital shifted to Kashmir in summer and to Jammu in winter. It was stopped in 1987, but that was changed on public demand

Now we are on Telegram too. Follow us for updates
TAGS
Durbar move Jk secretariat move