The reshuffle is likely to involve a good number of ministers of state ranks besides filling a few Cabinet berths.

NEW DELHI: Decks have been cleared for the expansion of the council of ministers led by Prime Minister Narendra Modi, with the government on Tuesday unveiling a new Ministry of Cooperatives along with the appointment of Union minister Thawar Chand Gehlot as Karnataka Governor.

The Prime Minister’s Office has been individually calling the selected candidates to join the council of ministers over phone, with some already reaching the national capital on Tuesday. Gehlot has been suitably accommodated as he was the Scheduled Caste face of the NDA. After a back and forth parleys, a grumbling JD (U) appears to have decided to join the government.

The JD (U) was earlier seeking parity with the BJP’s Bihar representation in the Union ministry by insisting on two Cabinet and two MoS berths. The other Bihar element in the ministry is expected to be Pashupati Paras, who captured the Lok Janshakti Party (LJP) from under the nose of Chirag Paswan.

Late Tuesday evening, the government informed that it has created the new ministry to strengthen the co-op movement. The government had earlier created the Ministry of Jal Shakti. “This ministry will provide a separate administrative, legal and policy framework for strengthening the cooperative movement in the country,” the government said. 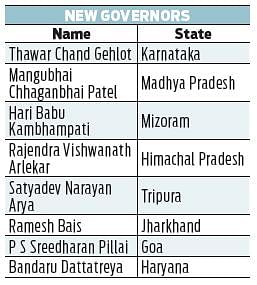 The reshuffle is likely to involve a good number of ministers of state ranks besides filling a few Cabinet berths. Among those who would most probably make it are Jyotiraditya Scindia, Sarbananda Sonowal and Narayan Rane. Apart from allies like the JD (U) and the LJP, Anupriya Patel of Apna Dal is likely to get a berth. BJP MP Jamyang Tsering Namgyal from Ladakh is also seen as a ministerial hopeful.

However, speculation on Shiv Sena returning to the NDA ended with party chief Uddhav Thackeray finally saying there cannot be any accord with the BJP. Caste arithmetic matters in the scheme of things, as the BJP pointed out that of the eight women Governors and Lt Governors it has appointed since 2014, five belong to the SC, ST, OBC and minority communities.

That math will be part of the larger strategy for Wednesday’s ministerial expansion so to balance social equations and state representations with an eye on elections next year. With the prime minister having clearly shown his preference for professionals in his team like S Jaishankar and Hardeep Puri, a surprise entry from outside politics isn’t ruled out. From the JD (U), Rajeev Ranjan Singh and R C P Singh are seen to be in the reckoning for the berths.

A few of the ministers are likely to be dropped following their performance appraisal, while key loyalists of Union home minister Amit Shah, including Anil Jain and Bhupender Yadav, are being seen as hopefuls to join the government. Portfolios like Commerce, Industry, Food and Consumer Affairs, Food processing, Social Justice, Civil Aviation, I&B are up for grabs, while changing ministries of a few ministers is also not ruled out.