Cooperative societies have 50.5 million membership in Maharashtra , In Punjab and West Bengal, BJP is looking to make headway into such bodies

MUMBAI/LUCKNOW/CHANDIGARH/PATNA/KOLKATA: Whether the opposition parties’ allegations that the setting up of a cooperation ministry, headed by home minister Amit Shah, is an attempt to undermine federalism is well founded or not is debatable, but it could give a leg-up to the Bharatiya Janata Party’s attempts to make inroads in cooperative sectors where it is not very strong.

Generally, cooperative societies are influenced by whichever party is in power in a state. For instance, in Maharashtra, the Congress and the NCP dominate them, while the BJP has been a latecomer. Gujarat has over 81,000 cooperative societies, which benefitted the Congress for decades but are now being controlled by the BJP. Assembly polls are due in the state late next year.

The influence also comes from their financial clout. Take for instance the recent scam in the Punjab and Maharashtra cooperative banks, the fraud is estimated at over Rs 4,000 crore. Many feel it could be game on in cooperative societies.

Sanjeev Babar, a former CEO of the Maharashtra State Cooperative Sugar Federation, said the cooperative sector “ensures a steady flow of money to farmers and enables him to purchase seeds, start a business and pay for children’s education. Farmers get a loan at reasonable rates and their interests are protected.”

“The chairmen or directors of sugar factories handle large amounts of funds. So, when the Congress-NCP was in the opposition, the core rural vote remained loyal to their political leaders,” Babar said.
The cooperative sector has nurtured several politicians, starting from the late chief minister Vasantdada Patil and incumbent deputy chief minister Ajit Pawar.

UTTAR PRADESH
The cooperative sector has largely been a fiefdom of Samajwadi Party patriarch Mulayam Singh Yadav’s family. Its association with the sector started in 1977, when Yadav was the cooperative minister. During his three tenures as the CM, Yadav either kept the cooperative portfolio to himself or allocated it to younger brother Shivpal Singh Yadav.

But it was in September 2020 that the SP’s stranglehold on cooperatives started declining. The BJP entered the sector in a major way with its candidates sweeping the polls for the UP Cooperative Land Development Bank, responsible for agricultural credit, by winning 293 of the 312 seats unopposed.

PUNJAB
The state societies are either controlled by the ruling Congress or the opposition Shiromani Akali Dal. The BJP stands nowhere, nor does it appear that it can influence the sector. An insider said the ruling political party ensures that their supporters are members of these societies.

An official said cooperative banks with 802 branches offer loans worth around `12,000 crore to farmers. The Punjab State Cooperative Development Federation has had politicians as its head. They include late CMs Darbara Singh, Zail Singh and Beant Singh, who was also a director of the Central Corporative Bank, Ludhiana.

WEST BENGAL
The Left Front in its 34-year rule never gave cooperatives much importance as they already had a strong cadre base in the rural areas. But Trinamool Congress supremo Mamata Banerjee, after wresting power in 2011, realized that cooperatives might be a useful tool to reach out the rural electorate. In 2013, she declared cooperative societies would not be empowered to attach the property of farmers defaulting in loan repay. “The creation of the cooperation ministry seems to be the BJP’s attempt to gain a foothold in rural parts by using the cooperative financial structure as a tool,” said a TMC leader.

MADHYA PRADESH
The cooperative sector was largely dominated by the Congress till 2003 but after the BJP’s return, its people started replacing the Congress, particularly in the credit, distribution of agricultural inputs and marketing sectors.

It was during senior cabinet minister Gopal Bhargava’s tenure as cooperative minister between 2013 and 2018 that not only did the sector expand, but the BJP influence grew by leaps and bounds. A few months after toppling the Kamal Nath government, the Shivraj Singh Chouhan government passed the Cooperative Societies (Amendment) Ordinance, 2020, to allow MPs and MLAs to become chairmen and vice-chairmen of cooperatives.

BIHAR
There are 34 state level cooperative orgainsations in handloom, dairy, agriculture, fertilisers, seeds and fisheries and they have an annual turnover of about Rs 30,000 crore. Till 2005, the Lalu Prasad-led RJD had a strong influence on these societies. With the power shift, the JD-U, BJP and others have made inroads into them. 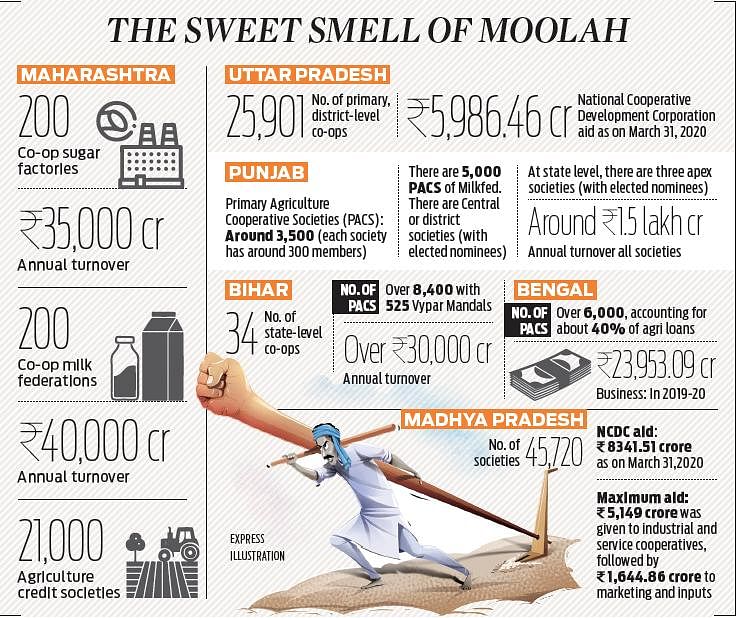 Now we are on Telegram too. Follow us for updates
TAGS
Cooperation ministry Amit Shah cooperative societies Union Government