Extensive CoWin app data analysis by The New Indian Express threw up this interesting phenomenon, but there are no clear answers as to why there is an allocation skew.

NEW DELHI: Amid reports of people who fail to get vaccination slots in major cities, travelling to nearby districts and satellite towns for jabs, an interesting correlation of several smaller districts near big urban centres/state capitals being allocated an unusually high percentage of vaccination doses has emerged.

Extensive CoWin app data analysis by The New Indian Express threw up this interesting phenomenon, but there are no clear answers as to why there is an allocation skew, though several officials confirmed the pattern of people from bigger urban centres going to satellite cities to get vaccinated. 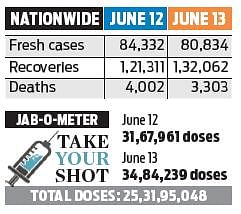 For instance, Meerut in Uttar Pradesh, Hooghly and Howrah in West Bengal, Pune in Maharashtra, Alwar in Rajasthan and Panipat in Haryana received more doses than districts with higher population in their respective states. In Meerut, a tier-2 city located 100 kms from Delhi and considered a part of the National Capital Region (NCR), 7.35 lakh doses were administered in a population of 34.43 lakh. However, there are at least 20 districts in UP with higher population that received lesser allocation. Take Sultanpur and Hardoi for example. The two districts have significantly larger population, but received only a third of the doses allocated to Meerut.

Authorities say the situation is similar in Bulandshahr, another UP district adjoining Delhi. According to Bulandshahar district immunisation officer Dr Rohitash Yadav, the trend is most visible in vaccination centres at Khurja, Sikandarabad and Anupshahr. "Almost 15-20 per cent of the beneficiaries in these three towns are actually residents of Delhi, Ghaziabad and Gautam Buddha Nagar. Owing to shortage of slots in areas they live, they are booking slots here," Yadav said.

The status is similar in Alwar, falling within the NCR. It reported over 11 lakh vaccinations, which is the second highest in Rajasthan after Jaipur. And Alwar is not the most populous of Rajasthan’s 33 districts.

Another example of this disparity was recorded in Pune district. The district received 33 lakh doses against a population of nearly 94 lakh, but bigger agglomerates like Thane (over 1.1 crore population) received only 19.21 lakh doses.

In Hooghly, adjacent to Kolkata and home to 55 lakh, 8.84 lakh vaccinations were carried out, which was much more than vaccinations carried out in districts such as Nadia, Purba Medinapore with similar populations. Budhadeb Roy, a resident of Sinthee in Kolkata, was struggling to get a slot. "I went to a health centre in Hooghly and got vaccinated on May 5," he said.

Patna got nearly 12.61 lakh doses for a population of 51.38 lakh. Saran district received 5.21 lakh doses against a population of 39.51 lakh. However, districts such as Gaya, Muzaffarpur and Samastipur, with a far higher population, received a fraction of the doses administered in Patna and Saran.