He also renewed his attack on Prime Minister Narendra Modi for allegedly favouring only a select few industrialists.

“Do you think there is a connection between hatred and unemployment? I will answer the question. There is indeed a link between the two. If hatred rises, unemployment too will rise and vice versa. Congress roots out hatred, BJP spreads it. Peace and brotherhood are the prerequisites for business and progress. Congress brings those,” Gandhi said interacting with a group of college students at Lahowal in poll-bound Assam’s Dibrugarh.

“No matter where they go, they will spread hatred. No religion teaches enmity,” he said. 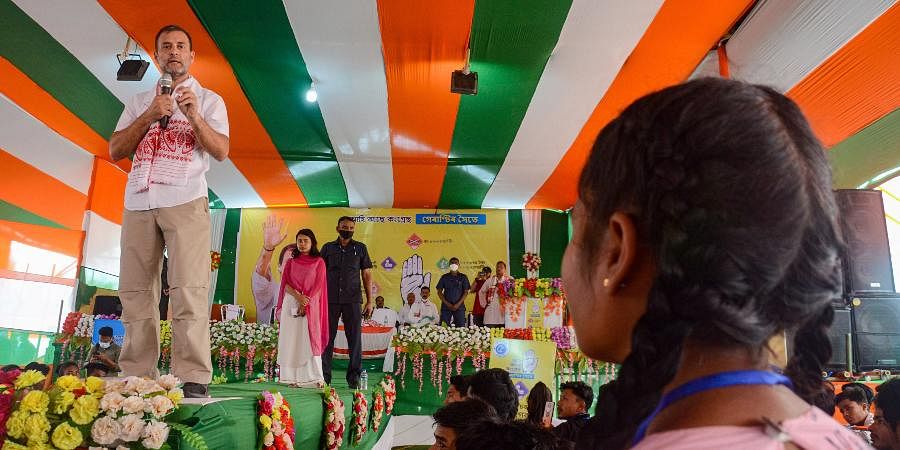 He renewed his attack on Prime Minister Narendra Modi for allegedly favouring only a select few industrialists.

“In today’s India, the youth cannot get jobs. PM Modi spoke of a start up ‘Make in India’ but if you check shirts, shoes and mobile phones, you’ll find ‘Made in China’ written on them. We want to see ‘Made in Assam’ and ‘Made in India’. BJP cannot do it. It works only for a select few industrialists,” Gandhi said.

He slammed the PM for allegedly destroying small and middle size businesses through demonetisation.

“At 8 pm one day, PM says he is demonetising currency notes of Rs 1,000 and Rs 500 denominations. That one step destroyed small and middle size businesses in the country and rendered lakhs of people jobless,” the Congress leader said.

“He lied before you saying that it’s a fight against black money. I want to ask you if the problem of black money is over. The goal behind demonetisation was to take out money from the poor’s pockets and put it in the pockets of country’s two-three of the richest people,” Gandhi said.

He said Modi did not stop there; he had then come up with GST. He committed that if voted to power, the Congress would hike the daily wage of Assam’s tea garden workers from Rs 167 to Rs 365.

“Daily wage of Rs 365 is my guarantee. The way we waived off the loans of farmers in Chhattisgarh, Madhya Pradesh and Rajasthan, we will give you a daily wage of Rs 365 if we are voted to power,” Gandhi said with his message directed at tea workers at a rally in Chabua in Dibrugarh.

Human cost of allowing virus to continue will cause more tragedy than economic impact: Rahul Gandhi to PM Modi