Congress-AIUDF combo will win some and lose some

This united face is also visible in Simla Bazar village, Baksa district, just eight kilometres away from the Indo-Bhutan border.

DIBRUGARH/NAGAON(ASSAM): At an All-India United Democratic Front camp office next to a verdant, sun-drenched paddy field in Dhubri district, the party’s flag bearing the election symbol of taala-chaabi (lock and key) flutters in the modestly hot spring breeze. Cut-outs of Hafiz Bashir Ahmed, the party’s Bilasipara West candidate, also adorns the office. But there is neither a flag of the Congress, its alliance partner, nor a poster with a photo of Rahul Gandhi or any other senior Congress leader. Contrast this with the Asom Gana Parishad’s roadside office in Kaliabor constituency, Nagaon district. Flags of AGP and BJP, its ally, can be seen and the hoarding even has a photo of Prime Minister Narendra Modi. 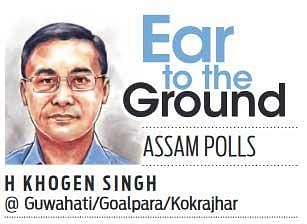 This united face is also visible in Simla Bazar village, Baksa district, just eight kilometres away from the Indo-Bhutan border. At a public meeting of the United People’s Party Liberal, BJP’s new Bodo ally, close to rolling tea gardens, flags of both the parties get equal prominence. But despite the Congress-AIUDF’s somewhat disunited campaign, it is widely believed that the new alliance will give the BJP-led combine a run for its money. This is because of the expected consolidation of minority votes. “There is a positive sentiment for the development work by the BJP government but their number will come down because of the Congress-AIUDF alliance,” said Chandan Sarma of Dibrugarh University.

The arithmetic of the 2016 assembly elections also suggests this, when the Congress had contested 122 seats and the AIUDF 74. The vote share shows that if the two parties had contested together, they would have defeated the BJP or AGP candidate in at least 14 seats. In six of them they would have won by a yard, getting 55% or more vote share.Take for instance the Batadroba constituency in minority-dominated Nagaon district. Had the Congress and the AIUDF contested together, they would have got 59.64% votes, much higher than the winning BJP candidate’s 37.61%. In Barpeta, the Congress-AIUDF would have got 58.51% as against the AGP’s 38.96%.

Besides the 14 seats where the Congress-AIUDF would have upstaged the BJP-AGP, in three seats the contest in 2016 was extremely close as the difference in vote share was razor thin. In Tezpur, the Congress-AIUDF combine got 52.54% votes while the winning AGP candidate got 52.56%, a difference of only 0.02%.In Ratabari, it was 47.94% for the BJP and 47.41% for the Congress-AIUDF while in Hojai, the BJP got 54.4% while the Congress-AIUDF 53.77%. But the consolidation of minority votes is likely to negatively impact the Congress when it comes to Assamese Hindu votes. This community has been strongly opposed to the AIUDF and its brand of politics that is largely centred round Bengali Muslims and illegal immigrants. “In upper Assam, the local Assamese are likely to reject the Congress because of the alliance with the AIUDF,” said Arindam Borkataky, a political analyst and lecturer at ADP College, Nagaon.

His sentiment was perhaps captured by a dhaba owner in Kukurmara, Kamrup district. Identifying himself as only Rituparna, he called the Congress-AIUDF alliance unholy and communal. “As far as this area is concerned, the majority of the people here are Hindus so they will all vote for the BJP. Why should they vote for any other party?” he asked. An interesting subtext of the alliance is that the Congress could have been more desperate for the tie-up than the AIUDF. This is clear from the seat distribution.

While the AIUDF is contesting 20 seats only, down from 74 the last time, it has not only got the safer constituencies but managed to get seven seats where the Congress had won handsomely in 2016. In two of them, Baghbar and Jania, the Congress had even got a whopping 57.58% and 56.41% vote share, respectively. “The AIUDF has got the better seats,” said Jay Panda, the BJP’s election in-charge for Assam. The Congress and the AIUDF did not comment.

Now we are on Telegram too. Follow us for updates
TAGS
Assam polls Assam elections congress AIUDF